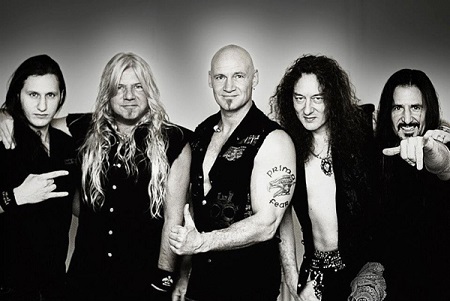 When veteran musicians start a new band at a time when traditional/ power metal is seen as old-school and passé, you have to know that it is coming from their heart and soul. Primal Fear’s self-titled debut album hit the streets in 1998, the second signing for Nuclear Blast in their roster more known for death metal and other underground styles than anything melodic or straight forward sounding (for trivia nerds, Hammerfall was the first). 16 years later, the band still exists- now onto studio album ten with this year’s Delivering the Black.

We all know that dual guitar riffing and soaring screams, along with thunderous drumming captures the lion’s share of appeal in this style. Primal Fear though have tried their best to expand dynamic horizons with occasional forays into epic arrangements and ballads- all with the same professional vigor and tact that has helped them establish a healthy worldwide fan base.

So a week before the band set out on their European headlining tour, I touched base with vocalist Ralf Scheepers who was more than happy to tackle a wide variety of topics metal or otherwise – and when they hit North America this coming spring, be sure to heed his words and put down that Smartphone when attending their shows… trust me, it’s okay to live in the moment face to face with the sights and sounds of Primal Fear.

Dead Rhetoric: Delivering the Black is the tenth studio album for the band, and you seem very content with your songwriting formula and performances. How would you describe the songwriting sessions, special moments you felt once you heard the initial playbacks and what differentiates this effort from say the debut self-titled album or your last albumUnbreakable?

Ralf Scheepers: Like you mentioned, this is a good chemistry we have in the band as far as a writing team. We have four guys writing for the band: Mat Sinner, Magnus Karlsson, Alex Beyrodt, and myself. We have always had an advantage with great songwriters in the band even going back to the first album. We grew together as a live band and also have grown together in terms of writing. It’s like you have mentioned; [it’s] easier to work together in the demo phase because everyone has good studio setups at home, so Mat and Magnus are swapping files to each other and they send ideas to me. I heard the playbacks for these songs and I felt like it was going to be an amazing album again. It was very easy for me to find melodies and put lyrics together to these songs. Not to say that I did everything in terms of the vocals, Mat also did some songs and Magnus did some songs where there were melodies and lyrics, Mat came to my house to write some lyrics and melodies as well. It’s a great team effort on Delivering the Black.

Dead Rhetoric: I look at Primal Fear as having a couple of distinct eras stylistically, the first three albums being a foundation, while the next three albums experimenting a touch with the songwriting- to which I think you’ve honed in on since 2007’s New Religion as far as adding in dramatic, epic style songs such as “Fighting the Darkness” and the new album’s “One Night in December.” How do you look at the studio discography of Primal Fear through the years?

Scheepers: I see the same thoughts, the only difference is we started a little earlier on the epic material with the Seven Seals album, and the song “Diabolus.” We wanted to upgrade our music a little bit more with instruments, symphonic elements and since the techniques were developing pretty well already it was possible to do it without having the big effort of inviting big orchestras which other bands are doing and is a great thing, but it’s also a matter of budget which we never had. We wanted to have a little more variety within our songs, the atmosphere, the down parts, the breathing parts in the songs. We think it’s a good alteration to have these epic songs, occasional slow songs, combined with those fast songs like “Rebel Faction” on the new album, it allows other tracks like “One Night in December” to really stand out.

Dead Rhetoric: Where do you see the guitar styles of Alex Beyrodt and Magnus Karlsson and how the duo combine to make Primal Fear such a strong power entity?

Scheepers: They have their own styles. Alex is pretty much the feeling solo guitar player and Magnus is a riff monster! But of course, they can both do the other things as well. It really sums up a sound and the team aspect, you can really hear the double solos as amazing. They work good together and fit good together.

Dead Rhetoric: How did the cancellation of the Metal Gods tour in North America in support of Black Sun during April/May of 2003 affect Primal Fear’s ability to establish yourselves in terms of a consistent live tour draw here? People seem to have a lot of opinions on whether it would be best for the band to try to get on a stronger opening/ middle slot touring package here versus headlining (which you will do again in the late spring)…

Scheepers: Absolutely. Well, the effect on us was an economical breakdown. Simply very hard because you have your calculations for expenses and tour revenues and we all had to stay in New York when the tour was cancelled, which is the cheapest place on earth! [laughs] In terms of hotel costs and so forth, it was a financial disaster, and it took us many years to come out of this hole. We have come out of it, we are now going on tour again and this will be the first time in three years here. It’s not so easy in the United States but we still have our foot in the door, it’s a building thing that people will come out more and show up more tour by tour. We want to spread our music all over the planet, and the States is one of those can’t miss places.

Dead Rhetoric: And there are no harsh feelings over Magnus having to stay at home during 2014 to take care of his children right? As I know that one of your former guitarists Tom Naumann will fill in for him live, correct?

Scheepers: There are no hard feelings, Magnus talked to us early enough during our plans for this upcoming world tour. We are colleagues and friends, everybody understands situations as being parents. I am a parent too, it’s hard to leave your children away at home. I only have one son, and Magnus has three kids so we understand that he can’t leave his wife at home alone with three children because there are some other problems, and we totally understand that. We had to think about what would work best for Primal Fear without having again a new face, so we have gotten on well again with Tom Naumann over the last year or so, we talked things out and he is keen and looking forward to this long touring spell which will last over five months in the end for the band. It’s great to have him back as a live player.

Dead Rhetoric: Could you have ever imagined the band surviving for 15 + years given the changing tides and tastes of fans in the metal industry? What factor(s) do you attribute to Primal Fear’s consistency?

Scheepers: The first answer is yes because we always knew that we will continue no matter if the market is good or not. We are not doing this music to be as Bruce Dickinson said in one of his solo songs a “Tattooed Millionaire.” It’s not possible to be a millionaire with music anywhere anymore. We are doing this because we love to be on stage and love to be making music with our buddies; it’s a live attitude for us. That’s the reason why we will do this until I fall off stage dead. The other key is people still dig us and love Primal Fear’s music. If you are heading into the charts that’s a good sign, it shows that people want to listen to our music and want to see us live. The reward for all the effort we go through is to please the fans and people with our music.

Dead Rhetoric: How do you balance the fans and their expectations when it comes to songwriting/ live performances against what you need to do to keep things fresh, alive, interesting, and entertaining for you guys as musicians?

Scheepers: It’s always hard to please everybody with everything. If it comes to albums or playing live as well, everybody wants to have a little bit more songs from this album or that album, but if you have ten albums together it’s pretty hard to put a set list together. I think we have a pretty good mixture and balance of every album live now. You can’t please everybody- first of all we have to like what we are doing, if we are satisfied with the songs we’ve recorded and brought out we trust that the majority of our fans will like it as well. There can’t be anything wrong with it.