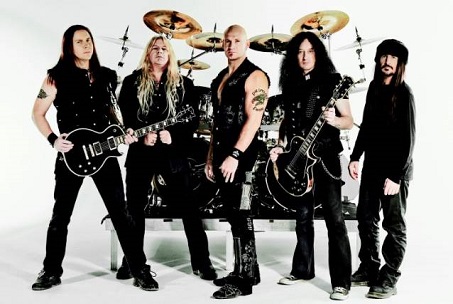 Dead Rhetoric: What are your views on the metal scene today? Where do you think things are healthy and where do you see room from improvement on both the fans perspective as well as the musician side of things?

Scheepers: That’s the thing, over the years many things have happened. We have talked before about the techniques when it comes to recording and the advantage of it. There is a lot of disadvantages, due to the printing press suffering and the internet coming up. The internet not only effected the press, it has really effected the music industry. They literally slept when it came to MP3 files and getting the rights to copyright terms over it. This was the beginning of hard times. I feel like things are coming back a little bit. People buy songs and albums on iTunes and in audio platforms where they have to pay for it – kids are educated in the way they have to buy music now and not go into a store to grab everything you need and not pay for it.

Online magazines now are out there where people can get information so fast, you can hear and read interviews I did yesterday on Blabbermouth the next day. So it’s a very quick thing that has advantages and disadvantages as well. The readers are now informed pretty fast, on the other hand I remember the times when I bought the magazines every month and I would be curious as to what was happening again and having everything in one spot.

Dead Rhetoric: I agree, when it comes to the internet you find that people have opinions about everything without being experts in the field, versus some of the in print journalists who have written about the scene and talked about the music for decades…

Scheepers: Absolutely. It started also with Blabbermouth. Now they have restricted comments to the point where people have to sign in through their Facebook account when they bitch about something, it was a pain in the ass over the years. People could leave their comments on [there] anonymously and it really stole some nerves personally. They have made things official that you need to post with your profile, and now people have a footprint and accountability.

Dead Rhetoric: Does it provide a good laugh to look back at some of the early photos I’ve seen recently posted on your Facebook page with your first band Voltage and the 1982 France photo where you were taking in the sounds of Black Sabbath with Ronnie James Dio? Have you been able to keep in touch through the years with some of those early people who shaped your metal tastes?

Scheepers: The funny thing is, the guy who posted those photos who I know, I had never seen them before. He posted them on Facebook and told me “Remember Ralf, this was out on our holiday in France.” I met him again two years ago after we lost track of each other for 10 years, and of course we were talking about our younger days, our time in Voltage and so forth. It’s a good laugh, he just scanned them in and I liked it.

Dead Rhetoric: How do you explain that your home country is considered one of the ideal destinations for heavy metal, and has never really lost its way even when tastes may change and new styles are introduced?

Scheepers: That’s hard to answer for me. I don’t want to say that other countries are not open-minded like Germany. Music from the west, the east – other countries in Europe. If you see the festivals like Wacken where people come from all over the planet to join us together, this is an indication that there can’t be anything wrong in terms of our country’s support for heavy metal.

Dead Rhetoric: Right, and people forget that this festival originally began decades ago with a few hundred to thousand attendees…

Scheepers: I was fortunate to play one of the first Wacken festivals with Gamma Ray back in the day. There were maybe 2,000-3,000 people there, it was outdoors already – it was just us playing on a stage built from a truck trailer.

Dead Rhetoric: What are some of the bucket-list goals left for Ralf Scheepers to accomplish both musically and personally?

Scheepers: Bucket-list of course, is to keep the standards we have. Music composing-wise it’s not so hard, I want to keep this standard for many, many years. Improvement is always good, looking back is always a bad thing so looking forward is a good thing. If it comes to touring, Australia for the first time will be great this year.

Dead Rhetoric: You recently played Costa Rica with Primal Fear, was that a first for the band as well?

Scheepers: Yes it was, it was a small festival and people were telling us we have to come on tour there. It was in the outskirts but it was great.

Dead Rhetoric: Will there be any chance for a follow up to your debut solo album in the near future?

Scheepers: No, there are no talks at the moment. The requests from the record company, they didn’t choose to pick up the option. I understood that this was going to be a one-off thing, but never say never. We are still collecting my ideas at home, which are totally different than the ideas within Primal Fear.

Dead Rhetoric: I did a recent interview with your guitarist Alex, and he told me he is not a big fan of the smart phone cameras that flood the live scene from the audience. What are your feelings on the aspect?

Scheepers: Absolutely the same. We want to have the next tour a Smartphone free zone, which is of course impossible. If the people take their one picture and then put their phones in their pockets, that’s fine. People have to be online to maybe get an emergency phone call, but I agree. People need to get back to enjoying the show in the moment, instead of capturing a video of a song with shitty sound and put it out on YouTube. I just hate that.

Dead Rhetoric: What are three bands that you think future hard rock or metal vocalists need to use as textbooks to learn the best techniques or improve their abilities as singers?

Scheepers: Depends on what they want to do – if they want to do the power metal stuff, the 80’s bands like Saxon, Judas Priest, and Queensryche. I speak of my tastes, if they want a little bit more rock ‘n’ roll it would be Whitesnake, AC/DC and stuff. You learn a lot from hearing, you are developing a musical mind.

Dead Rhetoric: Where do you think your voice and range have changed through the years? It seems like you have no problem still reaching those high screams on the recent material.

Scheepers: It has changed yes, a little bit more rough. I warm myself up, if you listened to me the very first minutes you would say, “Oh Jesus” [laughs]. I warm up properly, I have developed over the years and gotten smarter. In my younger years I didn’t think I needed to warm up, I would just hit the stage cold.

Dead Rhetoric: And how do you pace yourself vocally on these long tours- I would imagine there are times where the sound systems and venues are not all equal and you don’t want to blow your voice out during 4-5 months of shows…

Scheepers: I usually have an inner ear system to help, that can be a pain though because the sound can be different day to day. Sometimes it brings you down what you hear in your head. I do use the monitor boxes in parallel to what I hear within my inner ear monitors – the soundman he hates it, but its rock ‘n’ roll.

Dead Rhetoric: What is on tap for Primal Fear during 2014?

Scheepers: We will be on tour in Europe starting the end of January- and we will be in America in April, touring the East Coast, West Coast… not hitting as much of the South as I like, and one of my goal cities to play but we haven’t played ever is in Las Vegas. I want to be there, but it didn’t work out for this tour. Then hitting South America, the festivals, Australia and the Far East. Another extensive 4-5 months touring with Primal Fear, and we love it.