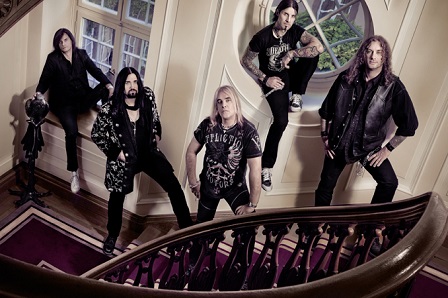 Situated in the lounge area of the band’s bus in Columbus, OH, Helloween guitarist/founding member Michael Weikath looks tired. Not tired from the near-30 years in the business, numerous lineup changes, a daunting legal battle with their former label (that reportedly cost them seven-figures), as well two colossal early-90’s failures, but tired from the constant time-zone shifts the band has had to endure during their recent run of touring in support of Straight Out of Hell. Having to jump from Brazil up to New York, through Canada (twice) in a span of a few days will do that to you, but here sat our man, cigarette (and jokes) in hand, ready to do one of the things he does best: Talk about Helloween.

For a band with such an utterly fascinating history, there is no way all bases could be covered during a 30-minute chat, so DR, accompanied with his darling fiancée (a proper Helloween fan in her own right), picked certain spots when interviewing Weikath, knowing that this conversation (like the previous three) would take on a life of its own. Sure enough, it did, as we gabbed about the band’s touring schedule, the new album, some to-die-for stories from the 80’s, as well as discussion in favor of a possible reunion with erstwhile former singer Michael Kiske and Mr. Kai Hansen himself. It’s a reunion that will easily do well at the cash register, but also close the book on a contentious split that nearly ruined the band 20 years ago. But as you’ll read below, it’s far from a done deal. Helloween circa 2013 is simply too good to just lunge at a something like that. Read on…

Dead Rhetoric: Any reason why Gamma Ray didn’t join you on this tour? Was it a logistics thing?

Michael Weikath: Probably. I think they’re preparing a new CD, and to do [that], they have to somehow record it at certain times. I think that’s the main thing. I wouldn’t know of any other reasons, but that seems to be the main thing if they want to get stuff done. I heard they’re in the middle of something…

Dead Rhetoric: How did Rio go? Maybe that’s what is throwing off your sleep.

Weikath: Yes! If you go there for 16 hours or something, and we played on the next day, and then we went to Bogota, six-hour flight, we stayed there an hour, then we went on another six-hour flight to New York City and we slept, and had the first show. And, the Canadian border. We were really damn lucky getting through. We had issues before on other occasions, so maybe they remember how disappointed they were [when] they didn’t find anything.

Dead Rhetoric: Everyone makes a big deal about Rio, so was it up to snuff?

Weikath: I wouldn’t know. If it doesn’t work out, then January, another year after. We don’t want to rush things because then, the product you have is crap. If it takes that time and we release in two more Januarys, or whatever, that’s fine, then it’s going to work out eventually. You got a record, and a tour, and festivals, and I think people sometimes have to digest an album properly, if you do one too fast and too quick, you might find you have a lack of ideas or a deterioration in quality of ideas if you do it too quick, and no one here is willing to try that.

Dead Rhetoric: You’re playing a lot of new songs on this tour; I think four or five, right?

Weikath: I don’t know, you tell me.

Dead Rhetoric: We both peeked at the setlist online, so I think that’s the right amount.

Dead Rhetoric: You have to pay attention – you’re the one playing the songs!

Weikath: Yeah, yeah, I’m playing them. We rehearsed them and everything is running fine [laughs].

Dead Rhetoric: This is your 30th anniversary, or is it next year?

Weikath: I didn’t count. If the Unarmed was four years ago, then we started out in ’84.

Dead Rhetoric: Any talk of doing something special down the road?

Weikath: Well, that’s what I said to our manager. We’d rather one of these things be every ten years because just because [the] preparations take two or three years, and if you want to do the five-year circle of doing festivities for every five years, you won’t get a chance to escape the loop. When you just ended the preparations for the actual festivities, then you can get started on the next festivities and then the quality of your respective albums in between might suffer.

Dead Rhetoric: What can you do at this point? I think a lot of people are clamoring for a big reunion.

Weikath: We could just equip ourselves with rocket equipment and fly.

Dead Rhetoric: [laughs] The thing a lot of people would like to see is a reunion with Michael and Kai. Is that a possibility?

Weikath: We will do that too. We’ve given thought to that and we’ve heard his [Kiske’s] words that he doesn’t like when people dream about those things in public in interviews. I’ve only merely been answering the questions of those wondering about [it], so I haven’t been dreaming. I don’t need that reunion as much as he wants it, or doesn’t want it. If he ever gives in to any of that, then you can swear we’d probably try something like that. Maybe make some good money and have some fun on occasions where people are enjoying what we’re doing then, as that particular strange outfit for the actual existing Helloween, with a few ex-members intertwined and you wouldn’t know.

Dead Rhetoric: It would probably be something where you just do shows, but not a new album.

Weikath: I don’t know…you never know. I heard someone say something like this, but I don’t know where I heard it. It’s clearly not a suggestion from the inside of the band or management, but I’ve heard people say that.

Dead Rhetoric: And, you’re coming up on 20 years of having Andi [Deris] in the band.

Weikath: He doesn’t mind if we did something like that as long as we keep the original Helloween the way they are. We have no interest in losing out on the actual quality of our releases…you want to bring across your identity as the band you are, and you don’t want to do so much of that “reunion stuff,” because it takes away from the other activities you are pushing. It’s kind of contradictory if you do this and that. You maybe try to do those things at the same time. It’s just from suggestions I’ve heard from people. I’m making my mind up on these things, how it would look like, or how it would be, or maybe it would be the Avantasia way.

Dead Rhetoric: The problem you’ll run into is that Kai will need to be involved, and he has Gamma Ray, which adds yet another layer, but that’s what you have management for.

Weikath: Yeah, that’s what you have a good manager for. That would be doable with the management we have.

Dead Rhetoric: As for Andi, he’s really taken the songwriting mantle. Have you come to enjoy how much good stuff he’s submitting for Helloween these days?

Weikath: Sure. You can’t keep him from doing 10 or 15 tracks or whatever, and it’s always kind of hard to say “This track is not so interesting, because…” And he goes [mimics Deris] “Why is it not interesting? It’s a great track!” And I go, “So we’ll fill up the album with all of your tracks and it’s another Andi Deris album.” “But that’s not what I want!” Whatever.

Dead Rhetoric: Your contributions are about two or three per album now.

Weikath: There were more on other records. It’s always a matter of the time you have for preparation and how you spend your private time away from that. Or, how many great ideas I’ve skipped that I’ve decided not to do because people don’t like stuff like “Can Do It.”

Dead Rhetoric: We talked about it before.

Weikath: Yeah, yeah, I know! Then, I’m not going to do anymore of that stuff because there’s been too much criticism and I’m not open for this kind of discussion and I better leave it off. I’m a peaceful guy. I like harmony and peace and stuff.