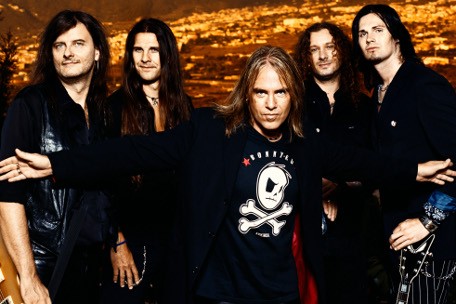 Dead Rhetoric: Like “The Game Is On” and the story was you came up with it while living in New York playing Game Boy all the time.

Weikath: I don’t hate it, but that’s why we call that album [Master of the Rings] the “Alice Cooper Helloween Record.” How many tracks we have, it’s more important you have a great CD. Like with Markus’s [Grosskopf, bass] great tracks of recent. I’m extremely happy with what he does when he does “Far From the Stars.” Or [the Deris-penned] “Make Fire Catch the Fly.” I couldn’t have done that chorus any better from the guitar work. Then when they try to copy Weikath and Kai Hansen style of composing tracks, “Far From the Stars,” what could they have done better?

Dead Rhetoric: I thought that was your song at first.

Weikath: Yeah, it’s good, you know? Why do I need to write another one like that if we already have it from Markus?

Dead Rhetoric: Your first time in North America. When was it?

Dead Rhetoric: Was that with Grim Reaper and Armored Saint, right? What do you remember?

Dead Rhetoric: You know there’s a full concert video from the show in Minneapolis on YouTube. [Which can be found here.]

Weikath: I was so fat because I just had some trouble and lost one testicle just a few months earlier. And then all the freakin’ hormonal things and that wasn’t too nice, being so fat and freakin’ ugly at that point in our career. Then you had to go out to the stage every day [makes tough face] looking like a munchkin.

Dead Rhetoric: You’re being too hard on yourself. You had that black and white outfit on, though.

Weikath: That would look good nowadays with the way I look now. When I did the outfit, I was still looking okay, but then I had to go out like that…thanks very much. There wasn’t anything I could change about it.

Dead Rhetoric: Was that your first full-blown tour with Kiske?

Weikath: That was it. We started with Overkill and did the European tour, like London, Hammersmith, the U.K. tour, then the American leg of it.

Dead Rhetoric: Was Karl [Walterbach, ex-Noise Records head] with you on this tour?

Weikath: I’m not sure which occasions he was there. He might have been in L.A. or Japan. He didn’t have anything to do with the general touring or whatever. He was basically sitting at home collecting money, and when there was something interesting, he would show up.

Dead Rhetoric: I talked to him a few weeks ago.

Dead Rhetoric: He seems to be in a good spot right now, probably better than when you guys were working together. We talked about the whole Sanctuary debacle, which I’m sure you’d like to forget. [Helloween were sidelined for nearly two years in the early 90’s due to a legal battle with Noise Records over Sanctuary Management doing a direct deal with Germany EMI, which was ruled as breach of their contract with Noise – ed.]

Weikath: If he would have been any cool, he would have said, “Okay, we’ll do contract renegotiations.” No freakin’ problem, just act cool, Karl. I actually expected that out of him, but somehow he disappointed me for being so freakin’ un-cool. He got all the trouble he went through with the lawyers; he’s got a pacemaker and stuff, I don’t. He still, I think, manages to drive women who are actually interested in him away. Whatever, you just have to consider these things and see how happy is somebody.

Dead Rhetoric: You made it through that rough period, though, after Pink Bubbles and Chameleon.

Weikath: I would have liked 36 million marks, too.

Dead Rhetoric: Was that the settlement?

Weikath: No, it wasn’t the settlement – it’s what he made on the band Helloween – he made 45 million marks. That’s what our ideas and musical concepts were good for at that time.

Dead Rhetoric: He said one thing to me that stuck out: That you, Michael, and Kai each approached him about doing your own solo albums. Is that true?

Weikath: There was simply no way to do that, because he wasn’t interested in that. That could have prevented stuff, like for instance the Chameleon record. If everyone would have been able to try like a solo record, we wouldn’t have needed to do something like the Chameleon album.

Dead Rhetoric: But you were still doing at least, some of the metal stuff for Helloween.

Weikath: I wanted to do some pop songs, too, but I thought that’s not so good. I didn’t succeed in doing great pop songs apart from “Windmill.” The same way it applies nowadays, I prefer not to not put anything like “Can Do It” on an album no more; I won’t do that. In the past, I decided to not put on the more poppy tracks I had for Chameleon because I thought there’s got to be a balance. We had the idea of doing an ultra-commercial pop rock record, which was Chameleon. I don’t know…I was left with doing the rock songs.

Dead Rhetoric: You did “Giants,” which is the most metal song on the album.

Weikath: Yeah. Rather, I would have put out a great pop song, like Phil Collins. Something that he would have done.

Dead Rhetoric: I always thought you were the Deep Purple guy, not pop.

Weikath: I like all sorts of things. I started out as a pop musician. The strange thing is that pop musicians always want to make metal, and the metal guys always want to make pop, but usually you can’t. For the Unarmed, we had people who had knowledge who can do it, rather than us trying to glam-fiddle things that we think would be pop, but then have a lot of crap left. You can call the Unarmed whatever you want, but it’s been executed very well, but the Chameleon record, we could have done way better.

Dead Rhetoric: So at that point in time, were you creatively spent on writing speedy metal songs? Did you not have another “Eagle Fly Free” in you?

Weikath: I could have, but I didn’t want to. I’ve stated my things at that time, but as you hear Kiske say nowadays, he would say there’s got to be artistic evolution. That’s the way we were thinking back then.  We thought okay, it’s time for the next step; try another Queen or whatever. It didn’t work out because the 70’s were over. In the 70’s, you could have pulled a thing like that, but at that point, you had to admit and see the repercussions and the re-thinking of the status quo, you had to say, “Okay, we better return to what we’re known for and what people expect of us.” And Michael wasn’t willing to do that. We were already playing half-empty venues on the Chameleon tour. There were ice stadiums booked and just 1,500 people showed up. You can’t run a tour that way. You cannot ignore that. You must say “We take it on us. We have learned from this disaster and will make a full return.”

Dead Rhetoric: And that became Master of the Rings.

[Weikath proceeds to burn a hole into a Styrofoam cup with his cigarette.]

Dead Rhetoric: Are they letting you smoke on stage here?

Weikath: No. If I want to do some proper acting, the cigarette is very disturbing. It gets in the way and annoying. I don’t have to smoke on stage… it takes away from my “acting,” actually. I’ve gotten so used to not smoking onstage; sometimes it was really annoying because you wanted to do something and you’re thinking, “Okay, I want to do something cool here, but my hair will get into this cigarette and I can’t do this move, and I’d rather do this move.” Smoking will keep me from doing from what I would want.