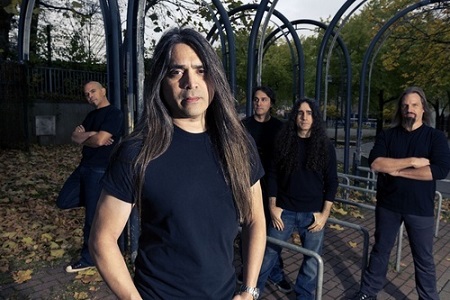 The second-longest tenured member of Fates Warning behind founding member/guitarist Jim Matheos, vocalist Ray Alder has gone from the man who replaced John Arch, to one of progressive metal’s most identifiable frontmen. Alder, who was plucked from obscurity in San Antonio, Texas where he was fronting Syrus, joined Fates Warning in 1987, just in time to record No Exit, the album which had the unenviable task of following the landmark Awaken the Guardian. Not only did Alder weather the pro-Arch storm, so did Fates, resulting in a run through the 90’s that permanently established the band as part of progressive metal’s “big three” alongside Dream Theater and Queensryche.

2004’s FWX was the last proper studio album from the band, so this year’s fresh Darkness in a Different Light is a welcome return. Dark and complex, the album bears all the hallmarks of prime Fates Warning, set to the tune of Alder’s soaring and hummable vocal lines. Clearly, the layoff hasn’t hurt the band’s product, as numbers like “Firefly,” “Kneel and Obey,” and “O Chloroform” rank among their most memorable songs in well, years. With a new album set to be released and American tour on the horizon, we snagged Alder from him Los Angeles homebase to do some BS-ing, and did we ever…

Dead Rhetoric: The band has been active on the live front since the release of FWX, but did it ever cross your mind that as a recording entity, Fates Warning may never record another album?

Ray Alder: Yeah, it definitely crossed my mind. People were doing their side-projects all over the place, and it was never discussed or anything that “We might not get around to doing another album, it’s been so long.”  It was always in the back of my mind that we would, though. Jim and I are pretty proud in that way and don’t want to just fade away. I knew we’d get around to do another album, it was just a matter of when. All of these fucking side-projects, but here we are now and I’m completely happy.

Dead Rhetoric: You had a stretch where Redemption was your main thing, obviously.

Alder: I think I did four albums with Redemption. Jim was doing OSI, and they seemed like his main thing. It was never meant to be that way, but I had the opportunity to tour and record with Redemption and I don’t want to sit around and do nothing.

Dead Rhetoric: There’s been a lot of patience from your fanbase – you haven’t totally fallen off the map. There’s genuine interest in another Fates Warning record. Did that help with getting the album together?

Alder: I think it’s nice and great. We never completely went away, and even if we weren’t touring the States, we were touring in Europe. We’d always go over there and do a few shows and do three-week tours – maybe subconsciously so people wouldn’t forget about us over there [laughs]. Our European fans knew that we were always around; it was American fans that probably feel a little left out. It’s nothing personal – it’s a lot harder to tour in America than in Europe. Everything is so far away and expensive, while in Europe, shows are usually no more than four or five hours away.

Dead Rhetoric: Did the Parallels reunion shows give you a kick in the butt to do a new album, or were they strictly for fun?

Alder: It was fun, but there was a point where we started discussing doing another album, like, “We have to go out and do another album.” At that point, we actually did it [the Parallels shows] with the original band. All of the years, it’s been me and Jim. Joey [Vera] is our permanent fill-in bass player, Bobby [Jarzombek] has been playing with us for years, and Frank [Aresti] has been with us for a while, so we thought it would be nice for everyone to be a unit again, not a bunch of hired guns. Once you’re a part of something, you’re more interested in it and invest much more. I think once we had the discussion that we were all a band now, it kicked everything into gear. Joey is great, Bobby is amazing – so is Frank. Parallels definitely opened our eyes to being a band again.

Dead Rhetoric: This is your first album with Bobby, and it’s not like you haven’t had technical drummers before – Mark Zonder being the first name to come to mind – but Bobby is different player altogether. What was it like working with him on the album?

Alder: Insane. It was great. After working on the demos for so long with the drum machine and hearing it that way – that’s how we did our demos. Once we got it down, it was up to Bobby and Joey adding their parts. Once I started getting demos back from those guys, man, the demo drums sound like crap, but I listened to them so much and I loved the songs and loved the way they were going. Mark is an amazing drummer; technically, he’s more of a jazz player. Bobby is technically more of a rock drummer, so for him to inject that rock feeling into a proggy sound was amazing. He did a great job. When I got the mixes back, I listened to it five times just because the drums and the production was great. I’m happy.

Dead Rhetoric:  The nice thing with the album is that it’s so consistent across the board in terms of how it’s both dark and proggy, like “Firefly” and “Kneel and Obey.” Was it important to stick with that approach since it’s a Fates Warning trademark?

Alder: It was. The thing was, when we talked about it, and we were in Europe and I told him I wanted to do something old-school. I use this word a lot: “organic,” which I hate [laughs]. Two guitars, a bass, and drums. No keyboards or anything, just how it was in the old days. That was the main goal, more of a rock-oriented, heavier, dark sound, but with hooks. I wanted catchy choruses that harkens back to Parallels and Inside Out. It wasn’t easy at first – “One Thousand” was the first song we came up with, but when we did “Firefly,” I was like, “Okay, this is the direction we need to go.”

Dead Rhetoric: What’s your preference: The more straightforward style of Fates Warning, or the really complex, progressive stuff ala A Pleasant Shade of Grey?

Alder: It’s funny because I like the straightforward stuff because live, it’s just great. But on the other hand, the progressive stuff always gets me going, and funny enough, A Pleasant Shade of Grey is one of my favorite albums.