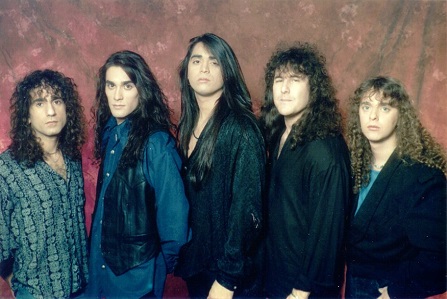 Dead Rhetoric: Mine too.

Alder: At that time, nobody was doing anything like that. For us, after doing Parallels and Inside Out, we didn’t know if we wanted to keep going down that road to make a radio hit, so to speak. We made an album for ourselves and [Metal Blade honcho] Brian Slagel was very cool with it. We had no outside influence and no one telling us what to do, and that album just because it was us, is one of our greatest albums, I think. To go out and play that album, do the whole thing live, it worked…we toured our asses off.

Dead Rhetoric: That was a really weird time for progressive and even metal in America in general. What do you remember most about the landscape?

Alder: When Parallels came out in ’91 that was the peak of what was happening. Queensryche was huge, and Dream Theater was about to be huge. We were recording Parallels, we saw Queensryche in Buffalo and hung out with those guys, and right after that is when Nirvana came out [laughs]. When I first heard Pearl Jam, I was like, “Wow, our ride is over.”

Dead Rhetoric: But it wasn’t really over, Ray.

Alder: Right, it wasn’t really over, but as far as the MTV thing, the coverage had shifted. The younger fans were going for something else. It was definitely a weird time; it was strange. Doing A Pleasant Shade of Grey showed us that we could do something risky and fans would still be behind us.

Dead Rhetoric: Where are you going lyrically with “O, Chloroform?”

Alder: That’s a funny one. It’s Kevin Moore’s lyrics. Go back to the Arch/Matheos thing, which at one point were supposed to be the songs for the new Fates Warning album but I didn’t work on them as much as I should, Kevin, Jim, and myself were working on a song, one of which ended up on the Arch/Matheos record. He had written lyrics for that and they were unused, and when we were doing this song, I had my melody, and Jim said, “What about Kevin’s lyrics?” He gave them to me, and the melody was put together and it fit perfectly. It took some weight off my back. It’s such a cool song, but I have no idea what the hell he’s talking about.

Alder: I know what you mean. I know what chloroform is, but I don’t know what he’s talking about [laughs]. I should ask him, and every time I ask Jim, he tells me to ask Kevin, but good luck finding him.

Dead Rhetoric: Where is he? In Turkey still?

Alder: He’s in America now; he’s going to be a doctor. He’s in his third year of medical school.

Dead Rhetoric: Going back, you joined the band in ’88, so that’s 25 years. The storyline of you replacing Arch is well-known at least from his vantage point, but how about yours?

Alder: I remember being completely intimidated and scared. I was a young kid. They were my favorite band in the world and I had never even left Texas and the only reason I left was to go to Connecticut to audition with those guys. I remember getting off the plane and having dinner…it was the weirdest thing ever, scary. I got through it and did a good job, and Brian Slagel came in and I remember thinking, “Oh God, Brian Slagel!” Now, we’re great friends. It was exciting and new, and I had no idea where it was going to go, but I didn’t care. It’s funny because music wasn’t my dream – I was just doing it in local bands, but once I started, it was amazing.

Dead Rhetoric: Do you remember what songs you auditioned with?

Alder: “Quietus,” a part of the from “Beyond the Ivory Gates.” I remember I recorded that on a four-track.

Dead Rhetoric: Your voice back then was so high…

Alder: [laughs] It was so ridiculous. I was trying to do the John Arch thing, and that was the 80’s – everybody was doing it, so I thought it should do it too. As I got older and before my voice started to change, I just didn’t want to sing high anymore. Chris Cornell, he can sing high now and he doesn’t sound silly to me. It’s not operatic; it’s screaming…I love his voice. Then you have other singers (mimics falsetto)…

Dead Rhetoric: See, you still got it in you.

Alder: I think my voice has changed because I didn’t want to be over the top; probably because of the cigarettes and booze [laughs].

Dead Rhetoric: Some of the stuff on No Exit is pretty high, like “Silent Cries,” but then you toned it down on Perfect Symmetry.

Dead Rhetoric: I have to ask: What’s up with the video for “Eye to Eye?” You’re not bad-looking guys or anything, but that’s not really fitting for your style, even back then. [Click here for total awesomeness.]

Alder: Honestly, that was funny because we were on tour and had to do a video. We were here in L.A., out by Magic Mountain, I remember. The director, when we showed up, there was this girl and we were like, “What is this?” He said, “Oh, we just have her here, we won’t even use her.” It wasn’t what the song was about, that was the other thing. “Eye to Eye” is more about fans of the band, this guy thought it was about a girl, so we just said “Fuck it” and we went with it. And I remember the director saying to me, “Why don’t you come over here and sit on the couch.” I said, “No, fuck it dude.” I remember the girl’s name: Nicole Bella. She gave me an 8 x10 and my girlfriend was like, “What are you doing with this?”

Dead Rhetoric: She was probably not happy with you, Ray.

Alder: She was hot. The whole album is about parallels between the fans and the band, not some girl, although it’s cool to play it off on stage if there’s a girl around, I guess [laughs].

Dead Rhetoric: You have an American tour coming up. What are your thoughts and expectations for it?