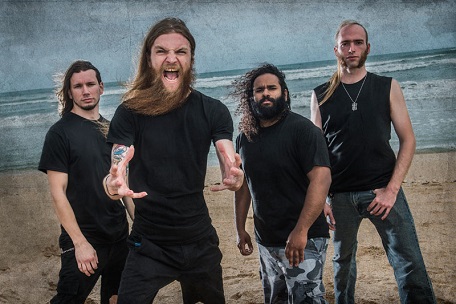 In today’s fight for people’s attention, you can’t just let as Aerosmith once proclaimed “the music do the talking.” Technology zooms at light speed, and attention spans shift almost as quickly. Musicians know that they have to claw, scratch, and fight for every inch of traction in the scene. One of the best acts applying a hand to hand appeal in the current decade who have developed quite a fervent following in North America is Michigan’s Battlecross.

Their new album War of Will takes the energy, the chaos, and the melody of thrash and extreme metal to great heights of dynamic impact. The band has been delivering the goods consistently live, and currently enjoys a run of dates on the Rockstar Energy Mayhem tour. Feeling the need to seek deeper thoughts about the band, I reached out to guitarist Tony Asta one afternoon recently and he was very excited to share his visions for Battlecross and their desire to bring their style to as many people as they can.

Dead Rhetoric: You recently got the chance to perform at the second annual Orion Festival, put on by Metallica in your hometown Detroit area at Belle Isle. Tell us how you feel the show went for the band, and how exciting it is to meet the godfathers of thrash… what takeaways will you keep in your memory banks from this?

Tony Asta: It was unbelievable. To perform on the Orion festival was unreal. The fact that we were on the bill, we were like “Holy cannoli, we get to play with Metallica!” We showed up there to play and James Hetfield came back to meet us before our set, hung out with us for 15-20 minutes and we got to talk with him. It was totally surreal, hanging out with one of my idols. He surprised us by actually introducing us before we played, which was more than I could ever dream of. We were very happy to be included on the bill.

Dead Rhetoric: Now did you already know ahead of time that Metallica was going to perform that surprise set, doing Kill ‘Em All in its entirety?

Asta: No, there was a little buzz going around amongst the road crew that Metallica might join someone onstage and jam with a band or two that would be playing there, covers or something. We didn’t have any idea they were going to perform that album in its entirety, which was amazing. Yeah, a huge surprise.

Dead Rhetoric: The new album is War of Will, recorded in a quick month long session down at Audiohammer Studios in Florida following your late winter North American tour with In Flames, All Shall Perish, and Demon Hunter. Tell us how the recording and writing sessions went for the record, as I understand you ended up having to write some material at the studio and had three-four full songs fleshed out at the start?

Asta: Oh yeah, we were a little further ahead than that though. Some of the older songs on the album were written at the time we went in to re-record Gumby’s [vocalist Kyle Gunther] parts for Pursuit of Honor, so that was in 2011. Two of the songs were written at that time, and all the rest of them we have been working on for a while. We didn’t really dive in until last year – we had some skeletons of songs ready, but when it came to crunch time, which was December of 2012 and January of this year, that’s when we really came together and pounded out the rest of the material. The majority of the writing that did occur in the studio happened with the vocals.

They were very rough and unfinished- so with working Eyal Levi and Marc Lewis at Audiohammer Studios, they gave us some great ideas for how to bring out the best from Gumby with a little help from Don our bassist who writes some of the lyrics. Eyal also helped me out when it came to writing some of the lead breaks, I had a good idea of what I wanted to do but he was able to enhance those ideas, made him sound a lot better. I also have to mention working with Shannon Lucas on drums as a session drummer was amazing. We parted ways with Mike Kruger, our old drummer and Shannon [Lucas, ex-Black Dahlia Murder, All that Remains] stepped up to the plate and really delivered, making it a stronger and more cohesive album. We are very honored to have him on the record.

Dead Rhetoric: What do you see now as the major differences between your debut album and this new record? Do you believe life experience and all the touring you’ve done over the past two years brought together a stronger focus and vision for Battlecross?

Asta: The vision has always kind of been there, we wanted to do this for a living and touring as a professional, put out albums and play shows. As far as our sound between the two albums, I can definitely say we have grown a lot as a band from Pursuit of Honor until now. Just writing material that is more current with where we are now as musicians is key for us because playing the same songs for so long off the old album, we get to a point where we really want to play the new material. I think touring and seeing other bands and how they perform really influenced us as well.

Dead Rhetoric: The guitar harmonies are so strong on this record – I especially love the European style opening strains of “Flesh & Bone” as well as the closing section of “Get Over It.” How well do Hiran and Tony plan out these sections, and what do you consider the strengths of each guitarist?

Asta: Let’s see… those two things specifically I think I wrote. I have to say that with our tastes combined is where we get our sound obviously. The more melodic stuff that you are referring to, that is more my strength and the more straightforward, in your face, brutal tech stuff is more of Hiran’s thing, so when you hear them combined that is where we get that sound. I have to mention to that Don writes guitar riffs for the band, and he brings his own melodic feel to the band as well. It’s the three of us mixed together – it is a battle too when you first start writing a song until the time it is finished you see it alive, because there are times where it can be rough [laughs].

Dead Rhetoric: Which song on the album do you think took the biggest transformation from how it sounded in the initial stages until the final product?

Asta: I’m going to go with “Never Coming Back” because that actually is two songs put together believe it or not. That was a song that we had written a while ago and we just kept cutting the fat on it until Don came up with some ideas for the song – we combined it. It is still a short and sweet, to the point song.

Dead Rhetoric: What circumstances led to Shannon Lucas becoming the session drummer for this album? And with Kevin Talley now the touring drummer, is there an eventual plan to have a permanent replacement in the drum slot?

Asta: How did Shannon come to be? Well, we go back a few years… amongst our camp when we knew we were splitting ways with Mike we were like, “Man what are we going to do?” you know? Word got around quick among the clan that we were going to have to do something and Shannon stepped right up and said he was game. He was all about it, we sent him the tracks and he got a good feel for the music. We met up in the studio and he used the skeletons of what we had in mind and changed a lot of it into a more realistic feel and made it awesome. So that’s how that came about because we all know each other, and we are very lucky.

As far as Kevin Talley – he reached out to us kind of out of the blue. He was wondering if we were interested in this, and we knew Shannon was strictly a studio thing. We tried Kevin out, and he is working out really well. As of right now he is officially a fill-in drummer, but who knows what will happen this fall. We may take the next step, we may not, it all depends on how things go. He is a really cool guy, and he thinks highly of us so it is a really good mix.

Dead Rhetoric: You had some amazing tours in support of Pursuit of Honor – including Trespass America with Five Finger Death Punch and Killswitch Engage and a heavier tour with Origin, Cattle Decapitation, Aborted, and Decrepit Birth among others. Tell us what you think you’ve learned most about the road, how to function as sanely as possible, and any specific takeaways from other bands that have helped you navigate the winding ins and outs of tours?

Asta: Oh man! Totally… actually before that in February of 2012 we went out with Goatwhore and Hate Eternal for two weeks, it was parts of U.S. and Canada. It was our first taste of what things could be like, as opposed to our first tour which ended up being with a headliner that dropped off. That was supposed to be with Full Blown Chaos, and it just ended up being us, Rose Funeral, and Diamond Plate – and that was a taste of touring of everything that could possible go wrong did go wrong.

My van blew up, the headliner dropped off, and we thought is this what it could be like? The first two dates got cancelled after we got to the first venue, we thought this was crazy but we just kept on trucking. We found out through other tours that we can be treated well, hang out with cool bands, and play in front of 400 or more people a night, this was awesome. Going on tour with Origin was totally different – there were seven bands on the bill, all brutal, and we are the least brutal band on the bill. We were worried if anyone was going to like us, it was hot, but it was awesome. It was the most memorable tour I’ve ever done, even compared to the subsequent tours. It was such a huge learning experience as to how to really function with minimal things and being on your own for so long across the United States seeing so many things I’ve never seen before- the Grand Canyon, the oceans, and everything else. Origin was a humble band, they were awesome.

As far as tips/ suggestions for bands: pack light, make sure you have air conditioning, bring baby wipes and hang loose. Don’t get stressed out about the little things. Being in that situation where you are in a venue that’s a little bit bigger than a small club but not quite as big as an arena, you really get the chance to be in the face of the fans. When we are doing Trespass America, which is much bigger, when you are playing an amphitheater or an arena, you are at least 10 feet away from the first row, so when you are playing it is a different feeling and a different kind of feedback. That made things a little more of a learning experience, I will never forget that.