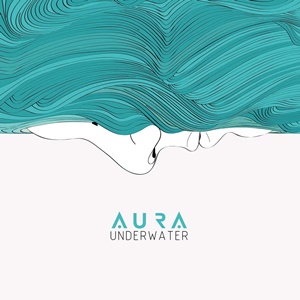 Active as a band for over twenty-five years, Aura from Italy carefully worked on demo material throughout the late 90’s to early 2000’s, finally releasing a debut album in 2008 with A Different View from the Same Side. Two more albums followed, bringing us to Underwater – the fourth full-length and their first in seven years. The four-piece employ a progressive metal approach that is quite diverse – not overtly technical yet intriguing in its subtle, advanced musical components, allowing lighter/dreamy movements to matter as much as clean melodies and heavier, swirling sequences.

The soothing vocal presence from drummer Giovanni Trotta with harmony support by guitarist Giuseppe Bruno and bassist Angelo Cerquaglia resonates in an interesting amalgamation of artists like The Eagles, Porcupine Tree, and Leprous – “Promises” as well as the groovy mid-tempo “Keep it Safe” sure standouts because of this undeniable stellar aspect, the latter featuring a killer keyboard break and cyber/EDM-like spots from Francesco Di Verniere to heighten that excitement. Brighter guitars pulsate during “Time to Live”, the lead guitar break very emotive and tasteful, the subsequent main hooks and transitions providing subtle lighter to heavier contrasts that are very spacious while alluring. The layers of guitars/keyboards often showcase Aura’s penchant for starting a song in one direction, only to quickly switch up the tempos or atmosphere – “Eternal Bliss” a tour de force in that front, Opeth-like driving guitars against clean/ambient parts building to that bombastic chorus payoff plus subsequent progressive instrumental payoff with Fates Warning-like movements. The focused nature to these arrangements with radio-friendly times (“Lights Behind the Clouds” the longest track at 5:53, the additional narrative speech sequences setting up the ethereal guitars, solid drumming backbeat, and quirky keyboard hook) allows engagement to be high while ear fatigue to be a non-factor. Outside of the nine originals, Aura spin “Astronomy Divine” from Pink Floyd in their own way, a bit more jagged and psychedelic than the well-established Voivod version from decades past.

The obvious talent at their instruments plus vocal abilities puts Aura in that current progressive metal class that deserves a wider array of opportunities when it comes to tours and festivals. Underwater is ideal for those who love dreamy, atmospheric-driven music that reaches for the stars, the musicianship sophisticated while tasteful as you uncover more with each successive pass.