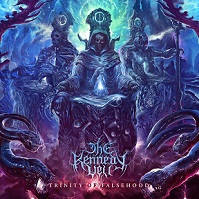 If one where to pick a movie title to accurately represent The Kennedy Veil, The Fast & The Furious would be the pick of choice.  Not because they race sports cars and are surrounded by scantily clad women (or maybe they do…if so, more power to them), but because more literally, fast and furious is the best way to describe their sound.

The Kennedy Veil play no0frills, modern death metal that’s heavily rooted in the speed and technicality of Origin and the fury of Decapitated.  From the opening moments of “Ad Noctum” to the closing “Perfidia,” you will not be given a moment’s rest to breathe.  Leading the charge is drummer Gabe Seeber (Decrepit Birth, Alterbeast), who consistently and gracefully blasts as if he was given an extra set of arms.

Despite the relentless pace and technicality, what keeps Trinity of Falsehood from being an exercise in the monotonous are well-written riffs and an abandonment of traditional deep cookie monster growls that usually accompany this sort of affair.  There’s usually at least one hook you can sink your teeth into in each track, and most reveal some hidden nuances amidst the frantic playing with repeated listens.  New vocalist Taylor Wientjes mostly sticks to a more mid-level roar similar to that of Pyrexia, going lower if needed and most importantly, keeping things more enunciated and allowing for some memorable choruses.

When the band does slow down from ludicrous speed, the results are usually devastating.  The slower and more brooding “King of Slaves” stands out in this regard.  The melodic elements of “Necrotic Gospel” and groove of “Beneath the Shroud of Atonement” also show evidence of a band that has more going on than what appears at the surface.  While some may cry foul at the lack of solos, it keeps the songs intact as short bursts of primal aggression that don’t linger past their prime.

The Kennedy Veil has thrown down the death metal gauntlet for the year to come.  In terms of modern death metal, this has just about everything you could ask for.  Trinity of Falsehood is a scorcher.