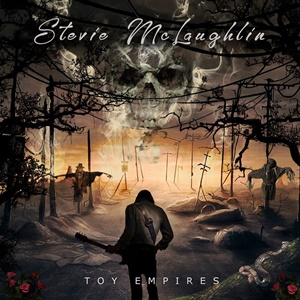 Best known for his axe work in the Irish metal band Sandstone, guitarist Stevie McLaughlin feels the time is now to extend his horizons as a singer/songwriter through this solo album Toy Empires. Truly a one-man operation here, all instrumentation falls on Stevie’s hands, feet, and brain – not an easy task when unleashing a progressive rock/metal cocktail that contains ten tracks and 63-minutes plus of music. The record contains plenty of versatility in terms of arrangements and atmosphere, encompassing a wider birth of influences from the 70’s-80’s and still maintaining a bit of that modern edge and heaviness necessary to enhance listener interest for the long haul.

Longer cuts feature segments that ebb and flow between beautiful tranquility and aggressive/progressive metal propulsion – the melodies within Stevie giving the listener a breezy, comfortable veneer almost like the Moody Blues or Threshold to make “Apocrypha” an early album highlight. His Irish heritage comes out in spots, most notably during the opening riff sequences for “Immortal Rose” – the guitar/organ interplay along with the slower tribal tempo hitting those cultural buttons. A calmer “Depletion” features clearer, lower register vocals and slower, stair step building keyboard/guitar passages against numerous narrative background elements – a marriage of everything from Marillion and Solitude Aeturnus to Pink Floyd, possibly a pinch of Billy Corgan in the phrasing and choice of delivery as well. Hooks are a major part of the appeal to this album – even through the advanced musicianship, there’s always that underlying sense of cohesive constructs and a logical flow part to part. It’s hard not to get swept into the lower crunch and repetitive mechanically inclined tempo for the title cut or the poetic flow to the progressive, AOR-oriented rock number “Shadows Alone” – so variant that you anticipate something fresh and exciting through each successive pass.

There are of course the standard numbers where people will think of Dream Theater, Fates Warning, and that type of offspring (“Apocrypha” and “Prophetic Skies” fall here), and yet Toy Empires feels like a breath of fresh air in a scene rife with technical wizardry. Proof positive that you can engage all the senses, still be progressive, and hopefully gain a following beyond the music school hordes.