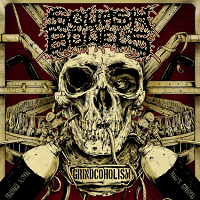 Listening to grind circa 2013…has it been perfected? Has the style seen better days, or will there be another tidal wave bringing in a Napalm Death, or a Brutal Truth, or more recently, Singapore’s Wormrot? It’s hard to tell, even as hard-working, reputable bands like Antigama and Squash Bowels continue their sonic assault, one is left wondering if there’s really anything left to do another parody and regurgitation. Not saying that’s what happens on Grindcoholism, but it’s very likely that could be the case.

These Polish grinders have been holding it down since 1994, so one can see their early influences by way of pre-1991 Carcass or early Napalm getting into the mix. The riffs are largely reminiscent of cold, oppressive British grind, with ample amounts of soot and grime all over them. Trouble is, they’re pretty much all forgettable, so the band has to do odd things like layer acoustic guitars underneath (“La Mienta”) or use the sound of clanking bottles (“Grindcoholism”) to create separation. It definitely works on those tracks, but the bogged-down nature of the meat of the album suggests that creatively, Squash Bowels might not have anywhere else to go.

Bear in mind that Grindcoholism sounds better than most grind albums (it’s a very death metal production job), and a few of the song titles are worth a giggle (“Tastelessness,” “Naked Positive Act”), but that’s all one is going to get from this.