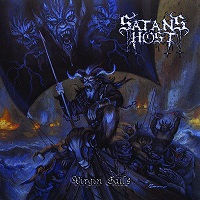 Satan’s Host is a band that has weathered many storms since their formation in 1977.  Their classic1986 debut Metal From Hell featured Leviathan Thisiren aka Harry “Tyrant” Conklin (Jag Panzer) before he went to form Titan Force.  The band’s sole remaining original member, guitarist Patrick Evil, carried the band on from their state of classic heavy metal to a jaunt in black/death metal to their current form of blackened power metal, rejoined by the legendary Conklin.

Virgin Sails is the follow-up to 2011’s By the Hands of the Devil (which marked the return of Conklin) and shows the band reaching for new heights.  Their merger of traditional heavy metal, power, thrash, and black metal is executed so seamlessly it begs the question why more bands aren’t following suit.  Full of blackened atmospheres, brutal riffing with sweeping solos, militant drum work, and of course, Conklin’s soaring vocal performance.  Some songs like “Dichotomy” reek of classic NWOBHM, while others like “Of Beast and Man” push the envelope almost to the point of death metal in their barbarism.  With the remaining tracks, you’ll get anything and everything in between, but it never feels like a “toss in everything but the kitchen sink” mess so much as masters of their craft finely weaving everything together in a way that few can.

It cannot go without mention of the Tyrant’s vocal performance on this album.  For a man of such presence in the metal scene over the years, his work here rivals his best in any band he’s shared the stage with.  His range is impeccable, from his charismatic power metal bravado, to some occasional raspy vocals (“Reanimated Anomalies”) and falsettos (“Vaporous of the Blood”), elevating what would be a great record to an outstanding one.

Virgin Sails is the type of heavy metal album that should find some appeal with everyone.  Power, black, progressive, death…it seems there’s nothing Satan’s Host can’t incorporate into their music and not sound better for it.  An excellent example of a band that has grown better with age.