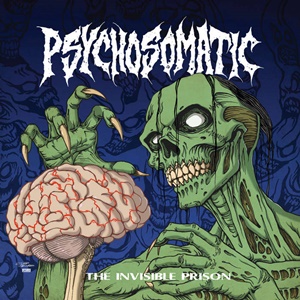 Crossover thrash has been a staple of the scene since the 1980’s. Combining the aspects of punk, hardcore, and metal into a form that oozes energy and aggression into often quick hitting songs, acts from D.R.I. to Nuclear Assault and Municipal Waste have made quite an indelible mark through their discography. Together now for over thirty years, Psychosomatic live for this style on their latest studio effort The Invisible Prison – bassist/vocalist Jeff Salgado the lone original member left in this current quartet. We get eleven hard hitting original songs that contain a mixture of older influences from the Bay Area and beyond, plus an intriguing cover of “Serial Killer” from Vio-lence, given a bit more of that modern punch/sheen while still exuding that fierce, off the rails character that this original from the second wave of Bay Area thrash epitomized.

All four members contribute to unison gang vocals – another trademark along with quick hitting transitions and jumpy riffs/tempos that encourage pit-friendly enthusiasm as tracks like “Riot Squadron” and “Labyrinth” roar by, the latter containing some extreme melodic death riffs and blast beat measures. Dan Mills and Viktor Hansen as guitarists have some sick twists and tremolo-enhanced licks down, as well as killer melodic to shred lead movements, check out “Fortune Dealer” and the much more controlled mid-tempo oriented “Highbinder” for some twin rhythm riff crunching and memorable sick instrumental parts. Jeff has a ton of words to roll off his tongue throughout, using a James Hetfield meets Chuck Billy-like delivery if thrown through the crossover style, evident right away on “We Don’t Trust You” all the way to the Slayer-esque ending “Spiral Orthodox”. The four-piece have adept skills to juggle the punk/hardcore-inspired grooves with that solid metal/thrash backbone- adding Havok’s David Sanchez as an engineer to keep the proceedings on point and very lively for tones and sonic output. Topics from psychosis/mental illness and its migration for “Schizophrene” to numerous social/political thoughts are expressed in angry bursts, matching the vital adrenaline-fueled musical proceedings.

If names like Hirax, D.R.I., Power Trip, and Slayer mean something to you along with a bit of extreme nuances, Psychosomatic needs to be a part of your world – this is a 37-minute plus exercise in mutual chaos and destruction.