Breaching from the pits of Greece’s stellar underground scene and unchaining their demons straight from the underworld, Macedonian black metallers Kult of Taurus illuminate the darkness of the occult, invoke phantasmagoric possessions, and channel the realm of the dead in grim requiems. Since forming in 2007, they have self-released a demo, an EP, and even a split with Sthenos, conjuring the hums of darkness and crafting their artistic concoctions in deliberated moderation. But back in October of 2013, after signing with Forever Plagued Records, Kult of Taurus issued their fourth work and first full-length album, Divination Labyrinths.

Kult of Taurus’s ritualistic sect, the makers of Divination Labyrinths, include the malevolent vocalist Sarpedon Ipsimus, two guitarists Sythanagon raucously slashing at a six-string and Bile rigorously nailing a seven-string, the abyssal bassist PlΑtΩn, and impaling drummer Nodens, all mixed and mastered by Norwegian metal-man Yusaf Parvez a.k.a. Vicotnik of Dødheimsgard. Their spectral and receptively spooky souls commanded the flesh of these men to erect a path paved in philosophic lyrics, promethean spirits, and wondrously dark dynamics.

Many of these pieces are manifested by vocal elements as Sarpedon shrieks spells, whispers curses, and raucously breaks through the atmospheric fog. Whereas in the album’s intro and outro titles, the gloomy “Introduction” and hollow “Tree of Gifts, Pt 2 – Death,” the divine instrumentals prevail in barren ambience prior to shifting their passage with desolate chants. “Where No Moon Rises” is one of many on this record that demonstrates both the instrumental and vociferous rudiments of Kult of Taurus. “ΠΤΩΣΗ,” the curious title written in Greek, translates to “Fall” and basically defines the composition. Led by ethereal chimes and eerie chants, the song falls into nightmarishly twisted black metal coiling in dynamistic effects like a turntable disc-scratch tossed in for a shrilling transition.

Kult of Taurus genuinely exhibit hot-blooded dedication to the black magics of music. Setting metallized cobblestones of transcendent unworldliness and sacrificing their sinister blood upon them in the name of metal, Kult of Taurus gnash through transcendent melodies of eternal darkness and turbulent Gnosticism. Welcome to their temple of sinister spirituality.

“Where No Moon Rises” lyric video: 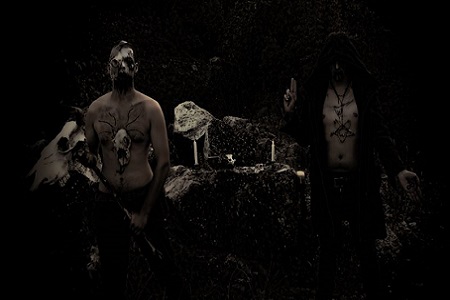