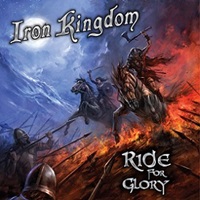 Gaining a healthy underground buzz through their full-lengths Curse of the Voodoo Queen in 2011 and Gates of Eternity two years later, they’ve also played at the prestigious German Keep It True festival – which never hurts for credibility. Ride for Glory as their third album receives a special cassette release from Tridroid – and a unified theme regarding warriors around the globe, choosing to write at times about actual historical events.

Prepare to learn about Icelandic exploration through “Leif Erikson”, 3rd Century female warriors from Vietnam in “Lady Trieu and the Kingdom of Wu”, and Japanese samurais for three of the seven songs. A building instrumental “On the Eve of Battle” that features militant marching strains and dual axe harmonies from Chis and fellow guitarist Kenny Krocher segues into the 7:34 “Leif Erikson”, an epic tempo and rich bass/guitar melodies reflect their love of 80’s Maiden, picking up the gallop paces halfway through as best traditional metal arrangements should. Occasional double bass throwbacks and pumping bass gives off more of a Rush/ Priest vibe, the progressive elements taking “A Call to Arms” to Enforcer heights as this is a 3:13 metal instrumental tour de force – while the introduction to “Night Attack” has a similar vibe to some of the early Testament twin exotic guitar lines.

A naturally helium high register is a bonus vocally for Iron Kingdom – Chris can melt paint or shatter glass through his delivery: Olof of Enforcer and Midnight of Crimson Glory would be proud of their influence during the title track as how he can hit those bird call notes smoothly and not strain himself is a miracle. Keeping this record at a vinyl length 40 minutes ensures repeated exposure, devil horns, and saving space for an Iron Kingdom back patch to sew on your denim jacket.

Sunlight and steel, iron and fire, Eddie would give Ride for Glory approval – and Canada’s answer to Iron Maiden keeps the melody and power of heavy metal alive and well.