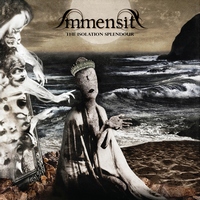 Sometimes a bit of gothic/doom can be just what’s needed to lift the spirits. Delving headlong into some more melancholic material and hearing the gorgeous melodies and atmosphere gives the best in the genre their ability to strike a chord with followers. Greece’s own Immensity has both the sound (and the fitting name) seemingly mastered on their debut, The Isolation Splendour.

While Immensity’s influences run through the usual suspects, there’s a nod to them and its put together in a way that still stays fresh and creative. The biggest of these would be My Dying Bride, Paradise Lost, and Katatonia. A good selection of flavors to add to the music, no doubt, but it’s what they do in addition that makes things stand out. A good chunk of the tracks above and beyond the 10-minute mark, and the band handles the length with ease. There are a number of transitions build into each track, moving between heavier and doomy material to some clean vocals and more gothic touches, to progressive influences and near-upbeat moments (see “Eradicate”). As eluded to already, the band name fits, as the sound feels huge – particularly in their heavier moments. These are laced with often elegant guitar melodies that play off the upfront growls nicely. It’s also nice that they don’t limit the clean vocals to ‘soft’ sections, keeping it from feeling clichéd and formulaic.

Yet another well-done doom metal piece to begin 2016 with, Immensity have made quite a name for themselves already with this one. It follows the classic doom/gothic feeling without sounding like a direct copy, and the songwriting keeps the tracks invigorated over the long run. There is indeed splendor to be had in listening to this one.