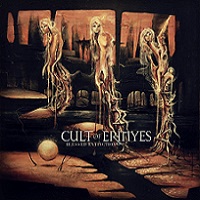 As winter approaches and most of the upper hemisphere is wrapped in the frigid embrace of the end-year (though admittedly here in Central California it’s still quite mild), the mood shifts to a want for a fitting musical backdrop. Enter Belgian trio Cult of Erinyes and the chilliest black metal release I’ve heard this year (though admittedly I haven’t rattled along in the kvlt basement as in years previous). While by no means earth-shattering, it’s an extremely well-put together album with just the right kind of production (not too shiny, not too gnarly) to be a perfect score for the coming season.

Sprinkled throughout Blessed Extinction’s eight tracks are a lot of what you’d expect and a few notable surprises. Blastbeats are always ready at hand and a fitting accompaniment to the icy and stoic guitar, “自爆” and “Dissolve Into The Stars” serving as noteworthy examples, especially enhanced with the dreary mid-song solo of the latter. Clean vocals are used sparingly in some surprising places, never falling into the usual tropes of melodrama or wankery, always as an enhancing sonic backdrop to whatever madness plays alongside or following.

Personal standout is late album gem “The Vlasov Notes” and its grind (not that grind, mind you) that eventually gives way to a completely broken world, all before ratcheting up and spiraling out in a display akin to that of a furiously dying star. Closer “Coda” is on a whole a standard black metal foray and might’ve fared better elsewhere in the album if not for the fadeout, but alas, it is a minor complaint. With the deluge of big name releases having come and gone for this year, there’s no time like the present to dig a bit deeper, gems like Blessed Extinction are exactly what you’re apt to find.