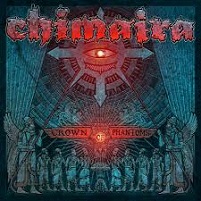 Chimaira’s penultimate moment came ten years ago via The Impossibility of Reason, essentially the band’s clean break from nu metal. Not only was it their biggest seller, but their entrance into the legitimate, “real” metal fray, and even though the lyrical content on “Pure Hatred” is about as sharp as a butterknife, Chimiara’s less-cyber, but more modern Fear Factory sound won a lot of people over. Fast-forward a decade and only vocalist Mark Hunter remains, but even though the faces have changed, the band’s sound hasn’t. Crown of Phantoms might be workmanlike, yet it doesn’t lack in heaviness and all the true-isms of Chimaira that made them viable in the first place.

There’s no build off 2011’s Age of Hell – the Clevelanders have simply padded the facade with more of the same triplet-dominated riffing (“The Machine”) and mindkilling grooves (“All That’s Left Behind,” “I Despise”). Formula-wise, the 11 jams here bear quite the resemblance to its predecessor or 2009’s Infection, and while lead guitarist Emil Werstler (Daath) can lay down a flashy solo like gangbusters, he comes across as awfully under-utilized; same for electronics man Sean Z (also of Daath). No matter, for Hunter keeps his vocals acidic and understandable, hauling in one of his better chorus moments via “Kings of the Shadow World,” and is sure to incite some growl-a-longs on “Plastic Wonderland.”

Crown of Phantoms comes up short to Age of Hell primarily because the permeating feeling that Chimiara could be doing more with what they have exists. They were never considered the archetypal type that Fear Factory or Strapping Young Lad were, yet the band might be getting too comfortable in their own skin, which is weird – five of these guys are relatively new.