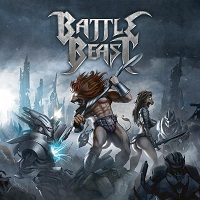 Is it wrong to like this? Meaning, should we feel ashamed for liking a group that uses every metal cliché known to (wo)man, but writes some infectiously good (and unintentionally goofy) songs? Perhaps Battle Beast is a showing of how strong metal is in Finland, where the country’s small population size allows our beloved form of music to be a viable commercial entity, thus necessitating the creation of this band. It’s a stumper. Nevertheless, this is the official American release of the band’s sophomore self-titled album, which initially saw the light of day in May, 2013.

A female-fronted entity, but not operatic and/or symphonic, Battle Beast relies upon the animated vocals of Noora Louhimo for its over-the-top countenance. At various points, Louhimo sounds utterly cartoonish (see: “Let it Roar” or the Halford-wannabe “Raven”), but in these moments are thrusts of power and synth-happy metal, a sort of Bodom-on-Primal Fear menagerie. Beyond that, one doesn’t have to think very hard to determine the bands Battle Beast are aping: “Out of Control” (see Nightwish’s “Wish I Had An Angel”); “Out On the Streets” (Lordi); “In the Heart of Danger” (Hammerfall); and “Over the Top” (Loudness/Gamma Ray, et al). Think the band is aware of this? (They better be.)

The shtick-element involved with Battle Beast (not to mention the appearance of Louhimo which automatically secures at least some part of the male demographic) is probably where the appeal lies. And in being so unabashed with their influences and song re-construction, this is the charm of a band who won Wacken’s 2010 Metal Battle contest. Should happenings of greater significance be around the corner, then good, more power to ‘em. At least they’re not Lordi.