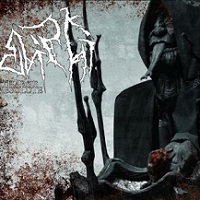 Talk about kicking off 2014 with a bang, goddamn. After a considerable period of gestation throughout much of 2013 for Avichi mastermind Aamonael (Andrew Markuszewski)  to perfect his masterwork, it is now finally upon us, one of the foremost releases for the new year – and good god does it hit with force. Tightly bound around a core set of themes and motifs and without a shred of fat in its ~42 minute runtime, Catharsis Absolute is exactly what its title implies, a searing work of both meeting and destroying personal haunts of every stripe with thrilling results.

At the core and filling out most of the body that is Catharsis Absolute is black metal, straight forward and largely without frills or unexpected experimentation with outside sounds. Having spent the last few years honing his own drumming, the results are enormous for Aamonael as the blastbeats that fill this album are pristine and for the music that overlies them, a better pairing could hardly be imagined. Straight forward at times “Flames In My Eyes” (though the song itself is absolutely suffocating) and open at others (the variable “Lightweaver”), Catharsis Absolute is a work steeped in a profound knowledge of what makes the genre what it is and how to play it exquisitely without sounding like a copycat or also-ran.

The bookends for the album (“Repercussion” and “Catharsis Absolute”) are solo-piano indulgences that initially set the tone and by the end allow some time for relief and reflection from the open flaying the rest of the album provides. Haunting and slow-burning, the latter in particular comes as something of a bitter aftertaste to a moment that, while long-building, doesn’t quite come to fruition in-line with what one hopes for. Melancholy runs rampant at times “Voice Of Intuition” and despondent rage at others (really, just peek into any song), making for what at times is an exceedingly emotionally exhaustive listen, even with the relatively svelte running time.

In the end, it’s easy to see why Aamonael was so keen to take his time in the mixing room as throughout Catharsis Absolute, its sound pristine and structure almost without flaw. No doubt this was a bitch and a half to create, the results are appropriately stunning when experienced first-hand. Profound Lore has an enormous winner on their hands to kick off the new year, holy shit.