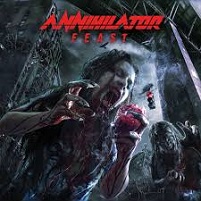 Fourteen studio albums over 24 years, Canada’s Annihilator remain steadfast and true to their metal ways. Morphing their sound to include mid-tempo grooves and ballads over the years beyond their semi-technical speed/thrash template, guitarist Jeff Waters has gained a solid partnership with vocalist/guitarist Dave Padden, logging his decade membership status with the act this year.

Feast contains nine new songs and 15 re-recorded tracks, but at press time, we didn’t get the chance to hear the latter, so we will stick to the former for all intense purposes. “Deadlock” wastes no time with the speed-picking, upbeat thrash tempos and solid vicious mean vocal attack from Mr. Padden – an assured crowd pleaser for the veteran fans. “Smear Campaign” on the other hand showcases Jeff’s groove-influences against his speed tendencies, a slower Pantera-like bounce for an opener that re-occurs against otherwise faster fare.

Other dynamics that appear on Feast include Living Colour-meets-Red Hot Chili Peppers funk/stomp on “No Surrender” and 70’s guitar hero rock for the opening acoustic/electric break which opens “Fight the World,” plus the 8:30 closing epic “One Falls, Two Rise” – proving that the three year layoff between albums gives the listener a wide array of feelings and textures without forsaking Waters’ trademark squeals, runs, and technical proficiency. Add in another ‘zombie’ themed-cover art and it shouldn’t be surprising what you get when listening to this band.

It baffles me that in North America Annihilator gets no recognition in terms of popularity for upping the guitar abilities of many current ‘thrash’ axe men. Feast should make the long-time faithful happy, and that’s what probably matters most in metal these days.