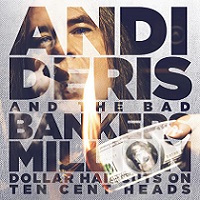 Andi Deris’ 20-year run in Helloween has gone better than just about anyone could have expected. The former Pink Cream 69 vocalist was drafted to not only replace Michael Kiske, but to help turn the band around in 1994. He’s not only done that, he’s also become the band’s primary songwriter, a feat made all the more impressive given the band’s illustrious past. Therefore, Deris is probably sitting on a heap of unused songs, or tunes not suitable for Helloween, hence the creation of his second proper solo album, which comes under the Andi Deris and Bad Bankers moniker, with Million Dollar Haircuts on Ten Cent Heads serving as the result.

The band name and album title – a direct shot at the banking industry – is the basis for the 11 songs contained herein. No sight of any power metal co-mingling, obviously, yet there’s some metal grit and grab to some of these jams, particularly the nasty “Banker’s Delight (Dead or Alive)” and the Euro-flavored “Who Am I?” The jangly and melodic “Blind” ends up being the album’s choice selection, with Deris’s raspy, always-identifiable vocal excursions blending in to the atmospheric scenery, while the more tongue-and-cheek “Cock,” poppy “The Last Days of Rain” and acoustic “I Sing Myself Away” are each enjoyable, song-oriented cuts.

Whether these are ‘Weenie leftovers are not, Million Dollar Haircuts on Ten Cent Heads should resonate well with the Helloween Mach III crowd. Just solid tunes across the board, and of course, Deris’s patented howl, which after over 25 years in the business, has aged nicely.