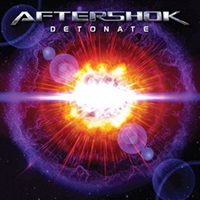 Hailing from Pittsburgh, Pennsylvania, Aftershok is a group that first crossed my ears back in the early Classic Metal Festival years, as their debut Unfinished Business hit the streets in 2002, when the second edition came through Cleveland Ohio…homeland of Auburn Records’ president Bill Peters. Detonate as their third album has been a long time coming so to speak – as it’s now 11 years between records. Finding the right replacement for Vic Hix on the microphone is not an easy task (especially if you remember his power during the Shok Paris days), so guitarist George Mihalovich and drummer George Borden patiently fleshed out the songwriting until Canada’s Gord Sheffroth made Aftershok whole again as the new singer.

Expect a number of high energy anthems where the melodies soar to the sky, the guitar hooks are front and center, and the rhythm section keeps everything grooving along like the best Priest/Dio/Maiden-style bands should. You’ll be able to dig deep into a lot of 80’s acts within Aftershok’s focused musicianship – occasionally bringing to mind such gems as Fifth Angel for “The World United” or Leatherwolf meets Savatage during a more dramatic, emotional arrangement like “The Hunger”. George as a guitar player prefers to hone in on specific harmony/melodic content in his layered axe play – sure the man can shred when he desires but tasteful breaks tip the scales in favor for quicker and more long term appeal. Check out his work in the Ozzy/ Randy Rhoads meets current Riot V-like “Enter the Dark” or even reaching back to Rainbow/Thin Lizzy for twin harmony action on “Rise”, the man knows his hard rock and metal history and develops an interesting, exciting take on things while the production values are very lively and more up to date than one would expect from the old school style the band lives within.

What will give Detonate legs so to speak in terms of broader respect and appreciation is the high octane, note sustaining prowess within the pipes of Gord. Much like current Riot V singer Todd Michael Hall, the man can move from bluesy territory to upper register god-like status, whether in a more straightforward power rocker like “When the Shadows Fall” or the natural uplifting closer “Cities on Fire” where he can belt out a 70’s Rob Halford meets late 80’s Sebastian Bach chorus – he should turn a lot of heads and be in the running for one of the best singing performances of 2016.

Welcome back Aftershok – anyone into classic, traditional metal with a strong melody and harmony-oriented platform both musically and vocally needs Detonate in their favorite listening device.