Within Temptation – Faster, Not Slower 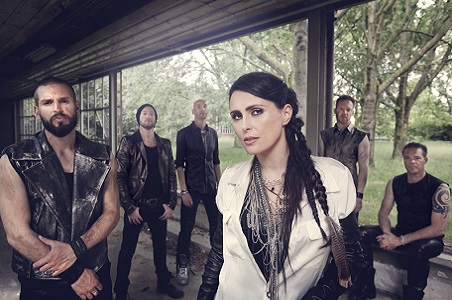 Two risky albums in a row for Holland’s Within Temptation – 2011’s conceptual The Unforgiving (complete with accompanying comic book and short movie), and now this year’s new Hydra, which features an array of popular guest vocalists…and a rapper. More on that in a second. However, a band isn’t going to climb out of the symphonic metal heap by playing it safe and relying on its past accomplishments, something WT could have easily done given the relatively superb nature of Mother Earth and The Silent Force. No, Within Temptation realize their crossover potential, aided largely by the personable Sharon den Adel, who has gradually emerged as one of metal’s most well-liked frontwomen. Oh, and she can sing too.

Hydra bears the order of traditional WT cuts (“Let Us Burn,” the Tarja duet “Paradise (What About Us?)” and “Dog Days”), but the inclusion of rapper Xzibit on “And We Run” has people talking, if only for the combination of an American rap artist appearing on a symphonic metal album seems so ill-fitting. It’s really not that bad of a fit, but you know how the metal scene works – change or outside influences creeping in are usually met with derision. We’ll see how the band fares once the dust settles.

For now, den Adel was kind enough to phone DR during her ever-busy press run in America, where she battled sub-zero temperatures in New York. For someone with a song by the name of “Ice Queen,” though, it was easy business for the affable, and jovial singer. Read on…

Dead Rhetoric: The band has always been this evolutionary thing – you’ve never been prone to repetition. In your estimation, how has the band evolved since your formation?

Sharon den Adel: I think we have changed with every album, actually. When we started, they labeled us as a doom metal band for Enter. When I started out, I was wearing wedding dresses because they were the only thing I could afford, so I thought, “Maybe I could make these look cool, wearing a wedding dress onstage with my Doc Martins.” [laughs] That maybe brought the Gothic element that people thought, but we had some of those elements because our sound was slightly epic with the orchestral parts. The next album, Mother Earth, people called us folk metal, or Gothic metal.

Dead Rhetoric: And doing the debut, Enter, what sticks out?

den Adel: We were still in school, in college. It was our hobby band, and I was giving copies to people in my class, like, “Oh, we’re going to support you, this is so cool!” Our first gig ever was Dynamo Open Air. We were on the main stage; it was packed because when we came to the festival, they have these plastic fences as you’re driving up, and we put our poster on top of them. That was the reason it was packed…people were like, “Who is this band?” And for this kind of music, there weren’t many bands around doing the same thing. It was the starting point for us. We weren’t rock stars from the first moment, we took it step-by-step and grew with each album.

Dead Rhetoric: Correct me if I’m wrong, but weren’t you going for a degree in fashion management when the band started?

Dead Rhetoric: So if the band doesn’t pan out, you’d be a designer of some kind?

den Adel: I did think about that and maybe, but I must say, the music world is a tough world, but fashion…I don’t know. [laughs] It would be hard to find people to do this with that I actually like. [laughs]

Dead Rhetoric: As for Hydra, you did the concept for The Unforgiving, complete with a comic book and videos, so was it nice not having to work with a script this time out?

den Adel: Yeah. Totally. It’s not a concept album like you said, but there is a red line. I found it more liberating, actually. Every time we’ve done something, the next thing will be totally different. Maybe next time it will be another concept album. [laughs] I felt we could do literally anything and it would totally fit. We were 100% focused on the music instead of any kind of side project like with the previous album and the comic. That took a lot of time, but this time, the theme of this album is face your fears and face your demons. The theme comes back every time in our lyrics with this album.

Dead Rhetoric: “Dangerous” with Howard Jones is a song that sticks pretty quickly. Working with a guy like him – who is pretty high-profile here in the States – what was it like?

den Adel: It was totally cool. We’ve followed his old band Killswitch Engage for quite some time. We had written all the parts and we thought of asking him since we all like Killswitch Engage and we thought it was going to do something crazy after we gave him the guidelines, but he came back with this really great epic way of singing. We were really surprised he could do this, but it was a pleasant surprise and we were really happy about it.

Dead Rhetoric: The duet with Tarja is a first for you. You’ve generally stayed away with duets like this.

den Adel: We had written all the songs, except for “And We Run” because we knew we wanted to have rap vocals. And we were like, “Okay, who can add to the songs?” We had a wish list, we would like to work Tarja, Howard, Dave Pirner (Soul Asylum), and we never thought everyone would do it. Every name we had was at the top of our list, and it was great that it worked out this way. They all did a great job and added something to the songs, and we got all four of them!

Dead Rhetoric: Having rap vocals on “And We Run” is certain draw some skepticism. Were you worried how people would react?

den Adel: I know people will definitely are never going to like it. We would be pretty arrogant to think, “This is what we like, so everyone else will like it.” A big part of our fans like what we did because they know we always do different stuff, like on the last album, we did “Sinead,” which has some dance influences.

den Adel: There were also people who complained about that song, like, “It’s too poppy and commercial.” But we like it! We try to change a little bit because that makes us who we are, and that’s the theme of the album – don’t be afraid of what people might think.

Dead Rhetoric: You were on Roadrunner for the last two albums, but with Hydra and your deal with Nuclear Blast, does it feel nice to finally be a priority over here?

den Adel: It does! They’ve done so much promotion already. I can’t remember why we didn’t do that much promotion with the previous albums…it might have been their choice to do promotion during the tours. Now we’re doing all kinds of stuff like acoustic shows, record stores, and venues. It’s fun to do something extra and get our fans aware that we have a new album. It’s a different kind of experience now. We’ve never done this kind of promotion here, only in Europe.

Dead Rhetoric: You and Robert [Westerholt; den Adel’s long-time partner, and Within Temptation songwriter/studio guitarist] have three kids. Being this busy and having the kids at home, how do you make it work?

den Adel: It’s an ongoing job and struggle. I keep everything in perspective and balance, but of course, sometimes it gets out of balance. I’m really glad that Robert is at home and at least one of is there. We find ways to stay in contact. It’s sometimes hard, but I couldn’t be just a mom, I have to do something.

Dead Rhetoric: The first time without Robert onstage – what was it like?

den Adel: We were always a team onstage. He was always so good since I never knew what to say to the audience; I’ve never been a big speaker. It was more of a shock than I expected, especially the first tours without him, I had a lot of trouble when things would get lost in translation – I had him to back me up, but now I have to do it on my own. I have the experience, but in the end, it was good because I was put on the spot and I have learned more than ever. It has been good for me. I’ve put myself over a certain barrier.