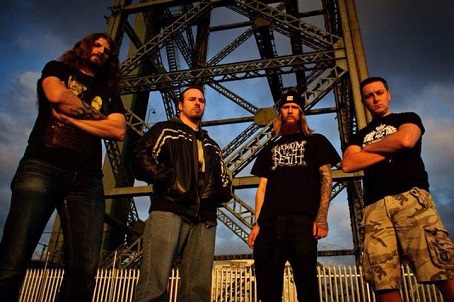 “There are more letters in the word ‘business’ than there are in the word ‘music.’” Now that’s a quote we can all get behind, and it’s even better than the proverbial “There’s no ‘I’ in team,” something no doubt uttered to any number of us in the sporting arena. The music business (metal included) is a dog-eat-dog world, a survival of the fittest, or sadly, the (temporary) survival of the trendiest. So when a legit, hard-working outfit like Scottish tech/death/grind mashers Man Must Die got lost in the margins at metal indie high-flyer Relapse, they did what any sensible band would do: They went independent.

“We decided to fund the recording of the new record through Pledge Music and then secure a distro deal to release it throughout the world,” begins guitarist Alan McFarland. “It’s a much better way of doing things in this day and age. Record deals are becoming a thing of the past and more and more bands are signing distro deals as opposed to bullshit record deals where you are tied into a three-album deal or whatever. With the internet now, bands can promote themselves without the need of a record label.”

The band has hooked up with German stronghold Lifeforce Records for the release of their fourth (and best) album, Peace Was Never an Option. If the crushing, raucous pace of this particular album did anything, it prompted DR to venture into the band’s back catalog, specifically their underrated 2009 No Tolerance for Imperfection. But as McFarland tells us, the band will never go such a route to release an album…even on a bigger indie.

“We will never sign a traditional record deal again because ultimately it’s just a loan with the worst interest rates ever,” laughs the guitarist. “Being more independent means you have the freedom to promote your band the way that best suits you as opposed to some guy who knows fuck all calling the shots.

“We got fucked about so much at that time that by the end of it, we thought: ‘What’s the point in doing this anymore?’ he continues. “Luckily without sounding cheesy, the fans helped us get back on track. They are the ones that picked us up when we were ready to throw the towel in; they showed us that people still gave a fuck. That’s when we decided to try raising the funds to record through Pledge Music.”

Further complicating matters were some lineup shuffles, which saw the band losing long-time bassist Danny McNabb as well as drummer Matt Holland. According to McFarland, newbies Daniel Firth (bass) and James Burke (drums) provided the necessary stability to hunker down for the songwriting process for Peace Was Never An Option.

“There was no goal, we just tried to write the best songs we could. No Tolerance is good, but we knew we could do a lot better this time round so we never felt any pressure. It’s pointless looking back when you are in a band, we focus on what makes us happy first and foremost and if others like it then, that’s great too. Music is about expression not about pleasing the masses. As long as we are happy with it and it’s from the heart, that’s all that really matters in the end.”

Appearing as a guest vocalist on “Abuser Friendly” is one Max Cavalera of Soulfly/Cavalera Conspiracy fame. While Cavalera is no stranger to lending his patented jungle grow on various bands’ records, he took the Man Must Die gents by surprise by offering his services.

“We were surprised because for one thing he just released the new Soulfly record and was busy promoting that,” admits McFarland. “And secondly he’s Max Cavalera [laughs]. He was one of my idols growing up, I absolutely worshiped Sepultura when I was a kid. It came about when Max’s son, Zyon contacted us on Facebook telling us his dad was into the band. We thought it was a joke at first but then we got in contact with Gloria, Max’s wife/manager and we sorted it out from there. It’s still blows my mind when I think about it.”

In what has become a global happening, economic issues presently embroil the band’s Scottish locale. The struggles that have overcome Great Britain are something McFarland and crew follow closely, serving as the foundation for the scathing, highly-intelligent lyrics that make up Peace Was Never An Option. McFarland explains:

“I wouldn’t say my lyrics are all pessimistic. I always try to have a positive side as well as the angry side. There are loads wrong with this planet and it doesn’t take a genius to work that out. I like to express that in the lyrics because I know I’m not the only one dealing with this shit and people can relate to it. Hopefully when people read my lyrics they take something positive from them because that’s how they are intended. Releasing anger through music is a positive thing; it’s much better to release it that way than it is to bottle it up and then go shoot up a school or whatever. You know what I mean.” 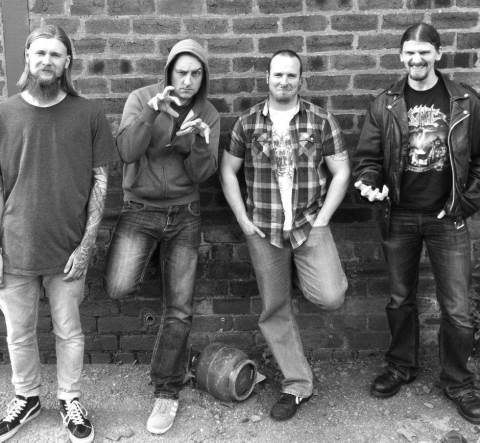 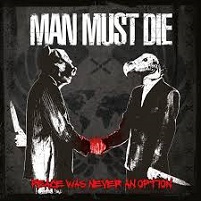