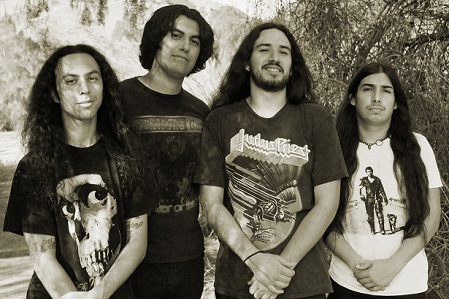 For a while in the metal scene, younger musicians appeared content to churn out a lowtuned amalgamation of crossover hardcore and nu-metal, devoid of any intricacy and appealing to lowest common denominator demographics. It seemed like the fire and brimstone approach that made thrash and death metal so refreshing during my youth was hard to find in the latest stateside bands.

Fortunately in 2014 (and probably due to all the instant access to knowledge and information at your fingertips), there appears to be a changing of the guard where the youth wish to push their musical skill set and abilities to the highest levels. Welcome to the world of Whittier, California’s Exmortus. This quartet through the years have established a sound that cross the borders of traditional metal, thrash and death- along with a healthy dose of neo-classical shred chops that would make Yngwie Malmsteen and Alex Skolnick green with envy at the fundamentals they begat.

Preparing to unleash their third studio album to date Slaves to the Sword, I immediately gravitate to the band’s sharp dual shred runs and sense of timing that comes with years of practice and years of touring under their belts. Exmortus love and appreciate the forefathers who set the stage like Iron Maiden, Judas Priest, Ozzy Osbourne, and King Diamond, while also falling in line with an act such as Revocation who can astound with dizzying technicality and killer hooks within adequate 4-5 minute constructs.

So it was a no-brainer to conduct an interview with drummer Mario Moreno, and I can tell that great times lie in front of this quartet, who are ready and willing to expose their sound to the underground masses through a long touring excursion.

Dead Rhetoric: What was your personal development like when it came to music- and eventually getting into hard rock/ heavy metal? Can you remember some of the first musicians and bands that captured your headspace (and allowance/ part-time job funds)?

Mario Moreno: Wow. As a band Conan and [I] are cousins, so we grew up listening to the same things. His dad, who is my uncle, he showed us Metallica, Slayer, Megadeth, Kiss, Guns ‘n’ Roses, all the hard rock and metal of that time period right off the bat. As kids we grew up on that, and funny enough pretty much supported us throughout- we’ve been into this since day one. One of the first albums I bought myself was Painkiller from Judas Priest, at the time that was when everyone was burning CD’s and downloading. At that age I didn’t have the money to buy a lot of albums, but Judas Priest was the first band I bought on my own even though I had burned copies of their material. I like had to have it.

Dead Rhetoric: Your latest album Slave to the Sword appears to be a much more harmonic laden affair with blitzkrieg shredding moments that are jaw dropping at times. Tell us about the songwriting and recording sessions and where you feel things improved or differ from your previous two albums In Hatred’s Flame and Beyond the Fall of Time?

Moreno: I think when we did the first album In Hatred’s Flame, the old [cliché] is true – you have as much time as you want fine tuning the material on your first album. A lot of those songs were written over the course of years because the band has been around since 2002 and it didn’t come out until 2007. We were releasing demos before the album and fine-tuning those songs. So I think the difference between the first, the second, and the third is timing. The first album we had a lot of time to mess around and develop somewhat of a sound, and on the second album you can hear how diverse things got, we were writing it in the studio. We didn’t really emphasize as much on the shredding, or the technicality of the song structures. This latest album we went through a bit of a lineup change, and we really focused on that sound which Exmortus had, heavy riffs with a lot of dual guitar shredding and like you said, the blitzkrieg guitars at a million miles an hour.

The recording sessions for the record went very well, we went with Zack Ohren as the producer at Castle Ultimate Studios up in Oakland, [we] normally would have decided to go anywhere as we did with the past two albums. We had more of a plug in and play mentality, but with this third record we wanted to sit down and fine-tune things because of the experiences we had on the last two. There were a lot of things that we felt were missing in terms of the quality, we went with Zack and he’s done a wide range of bands. Working with him allowed us to; we did everything to a click track, which is something we did on the second one but we didn’t take the time to really grasp…a lot of the stuff was recorded in the studio where this one was a lot easier knowing what we wanted. You can tell in the quality of the album how much work was put into it.

Dead Rhetoric: You recorded this new album in early 2013 – and I remember watching an interview you did online where this record was scheduled to come out on Earache/ Century Media in the fall of 2013 and it actually took until early 2014 to hit the streets on Prosthetic? Can you explain the circumstances surrounding this?

Moreno: Well, originally we were on Heavy Artillery, which is an indie label based out of New York that no longer exists. Earache bought them, they bought every band on there and originally we were on Earache. Earache was going to put the CD out and to make a long story short, they became uninterested and we ended up going with Prosthetic. They wanted a release date that would give them enough proper time to promote things and release it properly. It ended up being pushed almost an entire year from the time it was originally recorded.

Dead Rhetoric: What fuels the lyrical content in songs like “Ancient Violence” and “Foe Hammer,” a mixture of history/ fantasy storylines or there are times where real life situations creep in to some of the subject matter?

Moreno: I think for the most part a lot of it is fantasy, but I always like to think that people can only write from what they know, even if it is fantasy it’s coming from experience. Like “Slave to the Sword” for example – it’s talking pretty much about the band. There’s a line in there: “A kingdom of man, a master of war/ you remain a slave to the sword,” and the band is kind of our sword. We aren’t always going to be slaves to it, breaking the chains and remaining true. We do relate to real situations in the band- although “Ancient Violence” is based purely in fantasy, songs like “Warrior of the Night” is based on us playing every night. We don’t openly say things, we try to have a little bit of subtlety to it.

Dead Rhetoric: And whose idea was it to take a Beethoven classic “Moonlight Sonata (Part 3)” and put your own neo-classical heavy spin on it?

Moreno: Conan and I had always talked about doing a classical song piece, and then when it came to record this album and getting it finalized, we thought it would be something very cool to try with the new lineup. New band, new label, let’s try something new that seemed appropriate. The label and our management thought this sounded awesome and perfect.

Dead Rhetoric: How much practice and personal effort have you put in to develop your individual proficiencies at your instruments, as Exmortus performs in a neo-classical technical thrash/death style that isn’t necessarily the easiest to get down?

Moreno: Conan practices non-stop. We grew up together and I can tell you as a kid, he would not like going out, he was always playing guitar. You can tell obviously to play those kind of parts you have to practice a lot. The rest of us, we try to practice as a band two-three times a week for two-three hours at a time. We get that practice in together and our individual time as much as we can.

Dead Rhetoric: Are you hopeful that this lineup is solid, given the numerous changes you’ve had on second guitar and bass through the years? Do you still maintain friendships with former members?

Moreno: I think we are pretty confident that this lineup is going to be it. We have really tried to…out of the dozen or so lineup changes that we’ve had, we’ve probably kicked out two of the guys. We’ve always really tried to just work things out and really work with the members we have. The guys we have in the band now (Jovanni Perez-bass, David Rivera- guitar) are actually longtime friends- we all went to the same high school but were in different grades. We’ve known each other for years so I’m pretty confident that this lineup will be together unless something unexpected comes up, like someone having a kid- that’s what happened with our last bass player (Aldo Bibiano), we are still very close with him and went to visit his son. Some of the members we do keep in touch with, some of the other guys there is still a little bit of … we don’t really get along. That’s actually covered in a lot of the lyrics for our first CD In Hatred’s Flame, ex-members and the drama that comes with it.

Dead Rhetoric: You have a great manager who is very familiar with the ins and outs of the music business in former US label manager of Century Media Marco Barbieri. What keys or strategies has he helped with that you believe have advanced the band so much further/ quicker than you could have done on your own?

Moreno: Like you said, he knows the ins and outs and we as a band have been pretty much doing everything on our own before we started working with Marco. His guidance – he knows what has to be done and it takes a combination of a hard working band and a great manager to know things. Recording with Zack, he suggested that to us, those are things that Marco has contributed to that we would have disregarded in the past. A rock and roll attitude like we used to have doesn’t really work when you have to take care of business. Marco knows the business and that’s something that has really helped the band. I don’t think we would be where we are at without his guidance.