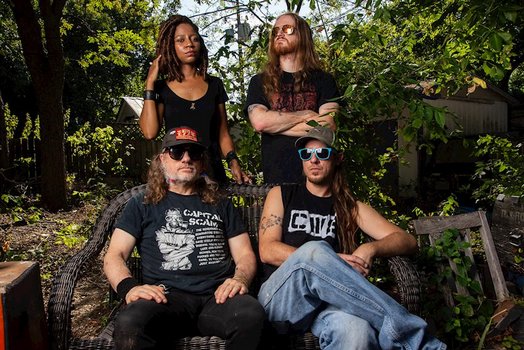 It’s Monday, and we could all use a little bit more pep in our step, so to speak. So we at DR have combined forces with Texas punk/metal act BÖNDBREAKR for an early look at their upcoming second self-titled EP. Set to release on October 20, BÖNDBREAKR has all of the aggression that you could ask for to get you up and moving, not to mention raising some social awareness at the same time. You can check out the EP in full below via the Bandcamp widget and use it to pre-order a copy of the EP, or simply click HERE if you prefer.

Listening to BÖNDBREAKR is an immediate gut-punch. It spares no moments in racing forward with immediate punk attitude and snarling metallic riffs with opener “Into the Night.” Frantic tempos steer things just outside of being too chaotic and deliver a solid adrenaline rush. Other songs like the groovier “Cop Rock” can slow things down (with some solid bass rumbling), at least momentarily, but still manage to come out swinging with bursts of fury as necessary. The punk flair rages with some mid-tempo riffing too, such as on “Kill Your Gods,” where the drumbeats fly and scorching riffs surround vocalist Hurricane G as she commands the scene with gritty lines like, ‘consume the ones and zeroes, there is no future here.’ The bottom line, BÖNDBREAKR are able to grab your attention with both their music and message.

Says frontwoman Hurricane G:
The BÖNDBREAKR self-titled EP reflects a general sense of consternation I feel as a Black woman in America. While many of these songs can be custom-fit to any listener’s experience, each one has a direct call-to-action at its core: Be bold. Be loud. Break the chains. Be a bond breaker.

With songs like “Into the Night” and “Angry Tooth”–lyrics written at the dentist’s office then later composed on my clarinet–you can hear the roiling rage that threatens to explode and ripple out to destroy everything in its path.

From sexism to unmarked economic castes and racism to toxic relationships, I want people who listen to this EP to feel like this is their middle finger to that which holds them hostage. They have the right to stand up and use their voice in the best ways they know how; the songs on this EP act merely as their soundtrack.

In any event, this EP is a tap on the shoulder, telling you to come hang out with the weird kids in the cafeteria – we’ve got something to show you that we think you’re gonna like.

BÖNDBREAKR (self-titled) was mixed by Michael Day of AMP Studios and mastered by Jerry Tubb of Terra Nova Mastering.