Long-running German death metal outfit MORGOTH have posted the album artwork for Ungod, their new studio effort due on March 30 in Europe and April 7 in North America via Century Media.

Comments MORGOTH on the collaboration: “We are very happy to have worked with Seth for the cover artwork of the album. We knew it wouldn’t be very easy to put the title ‘Ungod’ into a design that is vivid, brutal and aesthetic at the same time. We had received a couple of good different suggestions for the artwork, but Seth’s simply was the one who pictured exactly what was already in our minds. It can roughly be described as God drowning in the void, killing its own creation and becoming the ‘Ungod’ — the dawn of the Antichrist.”

A new track titled “Black Enemy” can be streamed using the SoundCloud widget below.

Comments MORGOTH: “After 18 years, we can finally present a first glimpse at our new full-length album, Ungod!

“We started with the songwriting in January 2013 and finished the recording process by the end of December 2014. It was an awesome experience to go through the sometimes very complex and challenging process of writing and recording an album again. 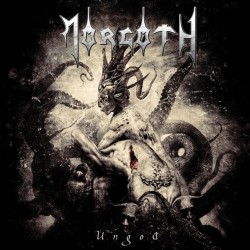