In Solitude – The World. The Flesh. The Devil (Metal Blade Records) 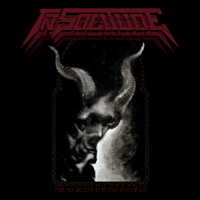 Because the only message board yours truly trolls is for a hapless football team in Northeast Ohio, one could only imagine the number of times In Solitude are going to get called “Ghost rip-offs” on the various metal-related message boards on the ‘net. It has to happen – there really are people out there (and in metal) that are dense enough to go off an Internet diatribe about how In Solitude are stealing ideas from who is right now, one of metal’s most buzzed-about bands. Wonder how many times King Diamond wishes he could file suit for damages on both bands…

On their second album The World. The Flesh. The Devil , In Solitude banks on total Mercyful Fate circa-Melissa worship, which is almost the same way Ghost operates, save for their propensity to be more straight rock-based. In the case of In Solitude (who are also from Sweden, like Ghost), the focal point is singer Pelle Åhman. Basically King Diamond without the falsetto, Åhman has his fair share of mystical moments here, specifically the chanting on the opening title track, as well the shakin’ “To Her Darkness.” The resemblance is uncanny, but the dude can dig up a good vocal hook at the drop of a hat.

Elsewhere, the Swedes are quick to brandish the quasi-power metal gestures of MF on “Demons,” where a spate of racy melodies keeps the pace moving. “Dance of the Adversary” employs a chain of high-wire guitar harmonies in a tightly-wound song construct, while “On Burning Paths” is the pre-requisite “epic” album closer, full of bold imagery of the NWOBHM variety.

Not a trace of originality to be found on The World. The Flesh. The Devil, yet (and we’ve said this a million times) there’s no substitute for good songs, especially when their riding the coattails of one of metal’s most cherished bands. Nice to see Mercyful Fate enter into worship territory – they’re totally deserving of it, as is In Solitude, who are a worthy substitute while King Diamond recovers from a myriad of health-related issues.