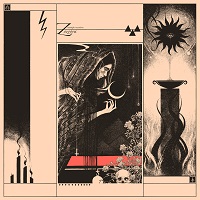 Cave-In and the notion of missed opportunities seem to be proper bedfellows. The Boston based one-time aggro metallers, one-time space rockers, then eventual corporate rockers have had a career few can deem as anything other than “interesting.” It makes one wonder where they’d be had they stuck to the ideals on Until Your Heart Stops or even Satellites. More than likely, a generic, totally unnecessary band like Zozobra wouldn’t be around. And neither would their Savage Masters debut. (Okay, Capt Obvious.)

The product of Cave-In guitarist Caleb Scofield, Zozobra does its best to mix it up with the current wave of sludgy hardcore metal. You know the type: crank the amps, mix in the punk riffs that are supposed to be disguised as metal, plop in some screaming, and process them through up-tempo songs, and there you go. We’re doing our best to not develop a complex when it comes to stuff like this, but it’s getting awfully predictable. We could have turned the album off after opener “The Cruelest Cut” and told you how the rest of it would transpire.

Savage Masters only benefits from its relatively brief running time (six songs, and they’re quick). You have to figure Scofield did this to get his metal kicks, for he’s not getting them in his main band. Ignore at will.