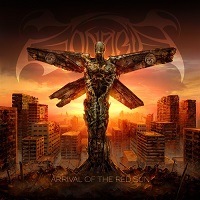 A mid-level Swedish death metal band such as Zonaria could probably make a half-decent career out of hiding behind their homeland’s imposing sound connotations. It doesn’t matter what they do, for some clown (like Blistering) is going to level some half-hearted comparison, whether they go with melody (Gothenburg), or not (Stockholm), or play at a mid-tempo (Hypocrisy)…they can’t win for losing. Because of this conundrum, writing solid, memorable songs should be the band’s modus operandi, but on their third full-length Arrival of the Sun, there’s just not enough to go around.

For a band that is supposed to be of the melodic variety, there sure is a dearth of it. More times than not, melody-seekers like yours truly will make that the first thing to look for when listening to an album like Arrival of the Red Sun, yet the scant speed-picking run on “Silent Holocaust” and quasi melodic bent of “The Blood That Must Be Paid” are in short supply. Instead, the Swedes unleash their arsenal of fluid, deathened riffs that cater (very wisely, it should be added) to the Behemoth throng.

Perhaps of most importance is the fact singer/guitarist Simon Berglund knows how to construct a chorus while not resorting to cheap tactics like gang-shouts or one-word choruses. Lyrically, he’s quite adept at painting a bleak picture of Armageddon, dystopia, and all of the above, so it’s no wonder that relentless vitriol spewed on “Gunpoint Salvation,” “A Lullaby to Those Still Alive” and “My Vengeance Remains” are forthright and vicious.

Just a few bricks shy of a full, vaunted Swedish death metal load, Zonaria’s inability to create the sort of memorable and searing songs their counterparts do is Arrival of the Red Sun’s primary downfall. And while it’s a lot easier to vouch for a band such as this, who at least make a play at individuality, one can’t help but feeling some semblance of disappointment.