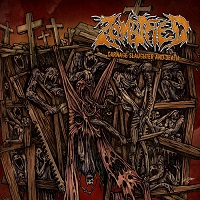 Faith No More often took the brunt of the blame for the nu metal movement; Autopsy should get some long hard looks for doing the same with the now played-out gore/retro death metal onslaught. Without an exact number, Zombified is at least, one of the dozen-plus bands we’ve covered in the 2012 calendar purveying a style of blood-soaked death metal that bears all the ingredients of Severed Survival and/or Mental Funeral. All this makes for a rather listless and generic listen by way of Carnage Slaughter and Death, the band’s second album.

The immediate tip-off as to how Carnage Slaughter and Death was going to play out came via the opening title track, which engages in the usual blasting, d-beating rabble rousing that bears near identical resemblance to fellow retro death metal mongers Cianide, Horrendous, and Vomitory. Cannibal Corpse-like cymbal chokes open up “Pull the Trigger,” “Clenched Fist Vengeance” holds firm with a Grave-esque grind, making it one of the few moments that stand out, while the brutal chugging on “Endless Days of Wrath” provides the necessary adherence to feral and unhinged death metal, albeit of the generic variety.

Since blaming people is the fun and totally responsible thing to do (not really), the fall should be taken by Zombified for being oblivious to the fact that there are roughly 100 bands that sound exactly like they do. Carnage Slaughter and Death is the type of album that sours people on brutal, regressive death metal, putting the bands that actually matter (Autopsy, Bloodbath, Cannibal Corpse) in danger of becoming null and void.