Zombiefication – At the Caves of Eternal (Pulverised) 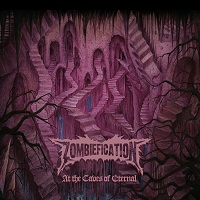 From the same duo that holds court in the vastly-underrated Majestic Downfall, Mexico’s Zombiefication play a far more linear style of death metal than their “other” band, who is an odd-duck pairing of Dance of December Souls-era Katatonia and Amon Amarth, of all bands. As such, Zombiefication doesn’t tread any one particular death metal line on their sophomore At the Caves of Eternal. In fact, the separation from the retro-mongers is rather obvious, and frankly, is commendable.

The riff choices from guitarist Mr. Jacko (hey, wasn’t that Michael Jackson’s tabloid nickname?) are dark and runny, preferring to stay away from the Metal Zone pedal and overdrive. In turn, it creates atmosphere – a foreboding one – and that’s probably where Zombiefication is going to make their money, for there are trace amounts of gore-soaked heaviness here. The cuts of choice come in the form of the barreling “In the Mist,” and “In the Gallery of Laments,” which is probably Jacko’s best riff run on the album. In light of this, the album tails off numerous times, whether it’s from the packed-in song structures (read: they’re fairly labyrinthine), or the dearth of melodies, evil or not.

For being at least a more cerebral alternative to an  otherwise boneheaded style at the present time, At the Caves of Eternal might wow a few purists and further stabilize Zombification as one of Mexico’s prime death metal bands. Beyond that, it’s nigh time to get around to another Majestic Downfall album.