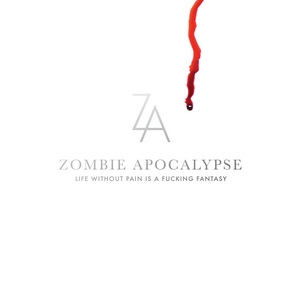 Rooted in that sound that merged hardcore with metal (pre-metalcore, if you will) Zombie Apocalypse has been away from the scene for quite some time. They released two EPs back in the early 2000s, but then took their leave. Now they are back in ready to strike in 2019 with a new EP that wields that crossover/thrash abrasion with a fiery metal/hardcore edge.

The jagged/pointed aggression of Life without Pain is a Fucking Fantasy is one that more old school hardcore and crossover fans will be familiar with. It’s something that hasn’t managed to stay as viable over the years for some reason, which may give Zombie Apocalypse an edge with those in need of something caustic. Each track is a ball of energy, with all but two tracks coming in around the 1-minute mark, and songs like “Fearface” and “Witch Press” hit that thrash/punk/hardcore vibe with an excess of fury behind them. The type of thing that’s utterly explosive in the live setting. “We Still Might Be Dying” shines brightest here, with an almost early The Haunted vibe to its thrash meets hardcore mentality that never waivers in its aggression. But it’s not without some melody either, as “Brave Digger” triumphantly exudes. Even a thrashier track like “You’ve Got Jail” slyly tosses in a few melodies and gang vocals to switch things up. The only thing that may slow a few people down is the large number of samples present in the EP (nearly all of them have one), but they are short and to the point – much like the band’s music itself.

If you are looking to blow off a bit of steam, Zombie Apocalypse have you completely covered. It’s a fun but short romp through an energetic metal/hardcore hybrid that feels it was ripped from the very beginnings of the genre.