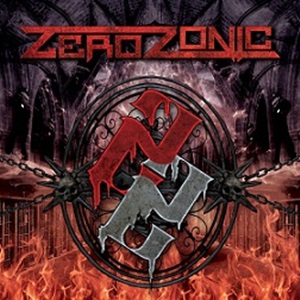 Featuring BloodRedThrone guitarist Daniel Olaisen, Zerozonic is an outfit from Norway that since their inception in 2004 have developed an explosive groove/thrash metal cocktail. Privy to a couple of their previous albums in 2010’s God Damn, Better, Best and the 2012 lethal riff charging follow up Aftersane, there’s been a four year plus break between efforts – ensuring maximum creative re-charge as the band carefully took their time on the recording front. After a few passes through the speakers, this self-titled nine song effort pulsates through massive groove/riff combinations and a relentless rhythm presence that keeps the proceedings swinging for the fences.

These musicians remember the larger, down-tuned heaviness that put Machine Head on the map, at the same time throwing in numerous harmonic twists that come up favorably to older In Flames/Arch Enemy followers. You’ll be hard pressed not to flail, headbang, or throw down in the pit to tracks like “Get Me Back” and hard-charging closer “Just Turn Away”. The songwriting also displays proper diversity, allowing for more melodic, restrained moments within “Pushed Away” or the power ballad “I Walk Away” to shine, Daniel and fellow guitarist Nicolay Viksnes Johnsen proving they can showcase emotional range in clean spots against the normal distortion driven arrangements. In fact, the latter track has a mid-section that rivals classic Metallica in terms of hair on end standing propulsion, while vocalist Arvid Tjelta see-saws between a confident clean style and his preferred Anselmo-esque biting nature.

The longest cut “Instrumentalis” at 8:27 puts Zerozonic in rarified territory – a shape shifting instrumental full of burly riffing, impeccable transitions, twin lead work rivalling Maiden and Metallica, as well as this edge of seat drumming from Frank Nordeng Røe- yet not necessarily the speediest of efforts, proving that you can be just as exciting in mid-tempo spots as compared to all-out blitzkrieg blasts. No worries at all on the production front, and at a tidy 44 minutes and change, Zerozonic contains plenty of staying power to appease thrash and melodic groove metal fans, from 90’s Pantera and Machine Head on through to Nevermore and Testament.