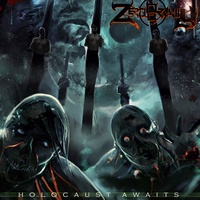 Ever feel that some melodic death metal bands like Arch Enemy are a bit too polished? If so, it seems that a search of India’s Zero Gravity is in order. To combine with the initial Arch Enemy reference, Zero Gravity also has a female vocalist (which is more of a big deal than normal since we are talking about an Indian band as opposed to a Western one).

Holocaust Awaits works because of the more overly raw sound that the band employs than many of this sort. The production doesn’t rush into the squeaky clean territory, giving a dirtier and visceral approach. The riffing does occasionally move into a bit more traditional death metal territory, again strengthening the band’s sound and giving it a punchier feel. However, there are some moments where things turn a bit more modern, with some mid-tempo chugging that almost pushes things into ‘core territory. Thankfully, these moments come few and far between and are countered by some delicious groove and flashy fretwork. A song like “Pistol in my Hand” combines a variety of tempos from the speedy to groovy, brutal vocals, and some flair on the leads. Speaking of vocals, Kratika Bagora’s vocals hit the sweet spot, going for a throaty roar that serves up some variation as needed.

Not much to gripe about with an album like this one. Zero Gravity employ enough variation here that if they play their cards right, could have some infectious appeal. Even fans who think that the melodic death metal sound has become to polished and processed could be swayed into giving this one a go. This is proof that a good organic sound can indeed make a difference. Holocaust Awaits is a promising debut.