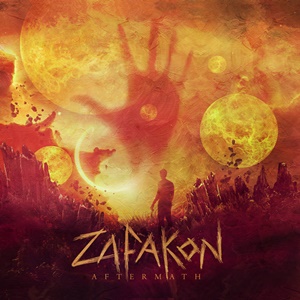 Fortunate to follow the progress of this Puerto Rico quartet over the years through their first two albums War as a Drug in 2013 and Release in 2015, Zafakon continually expand and adjust on their death/thrash leanings style-wise. Aftermath as the third full-length takes on a wider array of influences, the seasoning of the musicians plus experiences shaping a sound through these eight cuts that can be darker, aggressive, introspective, and musically advanced depending on what is taking place track to track.

The addition of blackened/Viking-like guitar strains after the fluid acoustic opening of the title track add that extra atmospheric force to the normal crushing rhythms – the transitions often sudden and sharp, while bassist Jose Gutierrez provides some intricate, progressive activities for dynamic contrast. Often the pacing can be a see-saw battle between tempo and riffs – resulting in some majestic movements, as you will hear in the doom/melodic death and psychedelic/progressive nuances that twist throughout highlight “Another Night Survived”, guitarist Marcus Veit ripping his larynx apart through a vicious, raspy word parade. The guitar harmonies from Yhann Ortiz and Marcus during “The Revenant” possess an interesting traditional NWOBHM throwback element, while the speedier blasting to shuffle/ groove tempo hits courtesy of drummer Nicolás Burgos excite and delight against the additional clean ambiance and staccato trailing squeals. Not everything is dense on the record – “Ink Ribbon” is a three-minute plus instrumental containing quieter, echo-laden guitars and softer jazz-like motions, something that is an alternative to the norm for Zafakon. Intertwining shorter, normal compositions with a couple of epic arrangements showcases the band’s obvious abilities to develop an array of textures – closer “The Pale” at over eight-minutes a thrill as it runs the gamut between melodic death, thrash, black metal and progressive in terms of parts, the guitar work mesmerizing as the momentum builds, subsides, and goes sideways when called for.

Aftermath may not be necessarily a standout at first because of the versatility present – yet a deeper dive through consistent exposure should pay welcome rewards to all listeners of underground metal who prefer a band like Zafakon to follow their passion instead of stepping into a faceless herd.