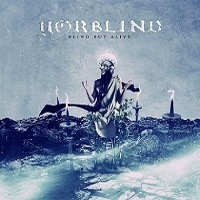 With a plethora of subgenres permeating metal, extending like the branches of an ever-growing tree, nearly every band can be labeled or categorized to fit one of them. While some may see it as a curse, preferring to have the freedom to be true to themselves and create what they want rather than be beholden to a particular sound or label, others – AC/DC and Slayer being the obvious examples – have no interest in straying from a tried and true formula.

Every once in a while, however, a band comes along that can’t be easily categorized or defined by a single label and this is the case with France’s Yorblind. Hailing from Paris, the band began in 2002 and has since released an EP and three full-lengths, the latest of which is Blind But Alive. The foundation of the band’s sound can best be described as a hybrid of melodic death and thrash metal, often utilizing Meshuggah-like start-stop rhythms and riff patterns, heavy double bass drum action and a mix of guttural death growls and screams (a la Leif Jensen of Dew-Scented) with powerful cleaner-sounding vocals.

“I Am Not,” the first proper song on the album, blasts out of the gate in Heaven Shall Burn-like fashion, with intense guttural vocals, a catchy start-stop riff and plenty of double bass, before injecting haunting melodies reminiscent of Insomnium. “The Scapegoat” contains a guitar melody that calls to mind Soundtrack to Your Escape-era In Flames, specifically “My Sweet Shadow,” while the aggressive riffing and sharp pinch harmonics in “Genesis” reminds of Machine Head’s “Imperium.” Guitarists Jipi (rhythm) and Mike Bry (lead) dole out hammering riffs and swirling solos all over the album – see “The Self Centered” and “The Teacher” for examples of both – while bassist Djiss adds a thick groove to the proceedings, the meaty yet catchy mid-paced stomp of “The Master” being a perfect example.

Clocking in with a total runtime of 36:12, the nine-song album packs a concentrated punch. Although the recipe for Yorblind incorporates a multitude of differing ingredients, Blind But Alive is a dish that goes down quite nicely and leaves the consumer coming back for more, as one helping just isn’t enough.