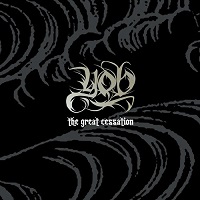 With the Middian fiasco now in the rearview mirror, main Yob-dude Mike Scheidt appears to have done the right thing by re-activating this very crucial power trio. Prior to disbanding in 2005, Yob had a firm grip on the monolithic doom sludge sound that has been worn-over by the likes of Zoroaster, Black Cobra and the like, so now it’s a matter of getting settled back in, and on The Great Cessation, they certainly accomplish that.

Lots of ugly, grueling moments here, especially in the riffage. Scheidt appears to be in no rush to throw down, as evidenced by opener “Burning the Altar” where his seismic wall of guitars takes hold and never lets up, while a killer groove pops in and out. “The Lie That Is Sin” follows suit, with what could be one of more the earth-shattering intros in recent memory.

Scheidt’s vocals are still a bit on the nasally side, which is passable since he spends very little time singing

. Instead, Yob, on The Great Cessation is more about those calamitous riffs than ever before and we can count on two hands the number of purely-heavy-as-balls moments on this thing; it’s one big rattle and hum, all accomplished in the span of five tracks. Naturally, there’s lots of open space, lots of pauses, drawn-out riffs, and tempos that wouldn’t dare to cross the 120-bpm threshold. Get used to it.

When the 20-minute title track make its way through, you’re already well-spent, debilitated, throttled, even. Yob have returned at just the right time, still capable of being one of the heaviest, most gruesome bands

in town. Music not for the weak of heart or mind, The Great Cessation is the 2009 definition of heavy.