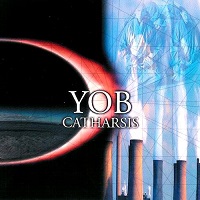 Physical reissues make less and less sense every year, but this one happens to be for an awesome doom record so we’re giving it a pass! All three tracks are presented in their original 49 minute run-time with no studio extras or demos, so this 10 year anniversary re-release of YOB’s 2003 seminal album Catharsis is probably not worth a second purchase if you have the original, but is a great pickup for anyone not owning it in one form or another.

Crushing riffs. Distortion. You can’t tell because it’s at the beginning of a sentence, but that’s Distortion with a capital “D.” Fans of doom riffs and groovy jams may already be familiar with the particular throaty roar and mystic reverence of YOB’s guitar-driven assault, and Catharsis is probably the reason why.

Thin, wavering vocals float beneath the heavy mix of heaven-cracking riffs and thunderous drums. Guitars are equal parts droning bulldozer and amped-up classic rock. “Ether” is the middle track, and the shortest of the bunch at just over seven minutes. Nonetheless, it has the most rock-based sound and song structure and is a thoroughly enjoyable tune with driving rhythms, a bit of a Sabbath-y feel and some fun wah-wah work.

“Aeons” and “Catharsis” are both north of fifteen minutes, playing more like extended spiritual meditations than verse-setup-hook-repeat. The record has a very introspective feel, and you can almost hear guitarist/vocalist Mike Scheidt’s mental journey as he searches for answers through the fuzz and feedback. The songs flow naturally, progressing and evolving with meaty build ups and spacey mellow sections to help avoid ear fatigue before YOB starts throwing slabs of dense granite at you once more.

Perfectly titled, the music of Catharsis is interesting and immersive. Those who don’t frequent fully instrumental work might still find YOB a comfortable waypoint, as there are varied and easily discernible vocals throughout and the songs vary enough to keep things moving with hooks to keep you reeled in, even when pushing the 20-minute mark.