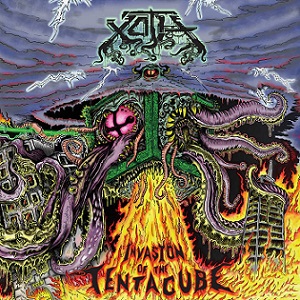 The traditional listing of a band’s influences is generally grounds for a full skim-over. Everyone is influenced by someone. There are times, however, when a band throws an oddball combination, like Seattle’s Xoth, who list Absu and Bal-Sagoth as two bands in which their sound is based upon. Aside from the “Now there’s an influence you don’t hear every day” thought bubble, it least provides headway that these lads are more than just a slapped-together bang of goons wanting to wear denim jackets with patches. Their oddly, yet suitably named Invasion of the Tentacube drives home that notion.

Whatever the next step above technical thrash and below technical death metal, that is where Xoth exists, which means they’re in Sadus territory…somewhat. The bass of former Bonded by Blood/Warbringer dude Ben Bennett is rather audible, so much so that his slaps, runs, and thumps end up being mini-song adventures, like on “Antediluvian Annihilation” and “Transcending the Energy Harvest.” While the band’s riffs tend to range from muddled to explosive (take cover on “Universal Death”), there’s a legitimate sense of cranked-up bombast that demonstrates Xoth never quite overplaying their hand, even though they have the means to do so.

Just because we’re in year-end territory and there’s plenty of hub-bub about the ferocity of Vektor’s 2016 album, you could sketch out the parallels. Xoth is high-concept, tech high-wire; too smart for gutter thrash, but not quite ready to take the Voivodian sci-fi dive, something Vektor has already accomplished. Split it down the middle with Invasion of the Tentacube and you have an experienced unit with four good heads on their shoulders capable of being one of those much-needed “sore-thumb” death/thrash bands.