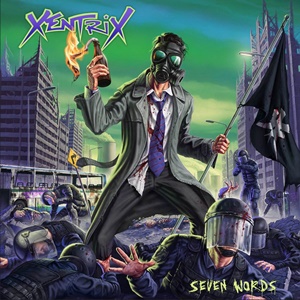 One of the breakouts during the late 80’s UK thrash push thanks to their dynamite debut album Shattered Existence in 1989, Xentrix moved through the 90’s shifting into left-field parameters in terms of their sound and choice of covers (remember their “Ghost Busters” interpretation?), fading away into breakup land by 1997. With half that classic lineup resurrecting the group in 2013, they now have bassist Chris Shires and second guitarist/vocalist Jay Walsh rounding out the lineup, releasing a comeback record in 2019 Bury the Pain that allowed listeners to enjoy once again more of that classic thrash base. Which puts us at sixth studio record with Seven Words – containing ten originals plus another cover, this time exploring a 70’s shock rock pioneer track that seems more aligned with the roots of these musicians attitude plus influence-wise.

As a band, the songwriting, performances, and energy still encapsulates a passion for the Bay Area movement – jackhammer rhythm guitar precision, catchy, headbanging-fueled transitions, the right balance between power riffs beyond the melodic earworms, militant vocal delivery, and the necessary tempo diversity so that all the proceedings contain more than enough emotional distinction. The tight picking maneuvers beyond the schooled lead break play (showcasing neoclassical/shred angles) pushes “Spit Coin” and “Reckless With a Smile” to the leaderboard upon initial passings as far as entertaining, solid arrangements – the latter infectious due to the interplay between guitars, bass, and drumming which shifts from groove to mid-tempo anthem templates through its verses/chorus tradeoffs. Circular tapping/ tribal tom action puts “My War” on the aural radar before the Metallica-esque riffs that include a vicious Walsh raspy vocal delivery take command, the rhythms plus dual guitar harmony lead break promising favored fan reaction (plus crazy body propulsion) should this be a staple in the future Xentrix live shows.

When the band reaches into more dynamic territory to set up specific tracks, it’s where the abilities of long-running musicians Kristian Havard on guitar plus Dennis Gasser on drums take ahold. Check out the calmer strains that set up the jackhammer main musical hooks on “Anything But the Truth”, as the occasional off-time progressive nuance keeps the ears sharp with anticipation for the next transition, the slower, crunchy groove segment allowing Kristian to unfurl an exotic stream of tasteful notes. As for the closing cover, Xentrix tackle “Billion Dollar Babies” from Alice Cooper, adding a heavier guitar foundation while Jay’s personality shines in the playful verses. Veterans of a style they feel fully immersed in, Seven Words keeps Xentrix in the thrash spotlight while understanding its diverse, musicianship-forward possibilities executed more than adequately within their capable hands.