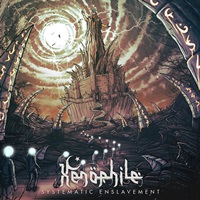 Long, drawn out processes often pay big dividends in final outcomes. Take the case of Systematic Enslavement, a debut full-length from New Jersey quartet Xenophile that the group managed over three years to flesh out to finally see the light of day. Sneaking a look at their Facebook page and hearing terms like progressive thrash plus influences like Cynic, Toxik, Watchtower, and Annihilator thrown into the mix held expectations on high that we weren’t going to hear a typical Bay Area inspired retread – and thankfully the visions match up to the aural reality on these 10 songs.

Guitarists Ron Iglesias and Leart Begolli tackle their parts like seasoned pros – gliding up and down their fretboards relentlessly while also injecting many segments with tender harmonization or acoustic, classical touches especially evident in the first two cuts “Systematic Enslavement of Consciousness” and “Absolution”. Expect a lot of technical, progressive oriented runs at a variety of paces, but Xenophile are also aware of the need to properly place heads down riffing and melodic textures to give the listeners markers for retention’s sake. For instance, the opening guitar sequence and squeals against the rhythm section for the relatively serene “Faceless Destiny” could hit well with Annihilator, Heathen and Metal Church followers.

Ron also doubles on vocals, and he tackles the volumes of words and intelligent thought provoking topics with vigor and a more rock-oriented approach – a la Keith Deen (Holy Terror), David White (Heathen) meeting a clearer Tom Araya. Not an easy task when the riff pile can be dense and tricky, as “Forgotten Holocaust” and “Suffer unto Tyranny” illustrate. It’s definitely another difference maker amidst the gang-oriented background vocal supplements or obvious mid-tempo transitions where the hordes will go head banging slam happy in the pit. People who love intricate details and sharp melodic runs with neo-classical, progressive, and shred tendencies have an enormous platform through Xenophile’s work to study – it’s rare to hear an American band willing to put all this time, sweat, and effort into their craft, and as such this record will gain kudos from musicians and thrash aficionados alike.

Marc Pappalardo replaced Matt Pavlik on drums after finishing the record, and the band is currently seeking out a unique vocalist for a five-piece expansion so Ron can concentrate more on his axe duties with Leart. Systematic Enslavement is outstanding progressive thrash, those who love Toxik, Annihilator, and the much missed Crown the Lost need this highly impressive release.