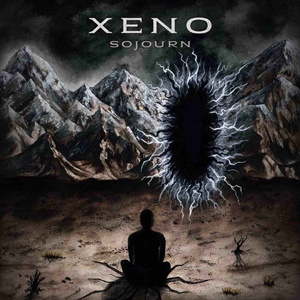 Progressive metal with light jazz, death, and djent elements properly puts Xeno in rarified air stylistically. This Dutch act released their debut album Atlas Construct in 2016, and in the four years between releases gained two new guitarists with Edwin Haan and Jasper Bruggeman. Sharing the stage with diverse acts like Voivod, Carach Angren, and Spoil Engine, the wide array of sonic branches and avenues taking shape on Sojourn the second album allows the listener to delve deep into a dense, dynamic performance throughout this eleven-track, 65-minute plus odyssey.

The opening instrumental “Revery” features calm piano strains against cascading clean guitar parts, revolving and circulating with restraint before “In Stasis” kicks in. The beginning of the first proper song very calm and alternative again before the crunchy guitars and off-time tempo sets the track into progressive metal wonderland, featuring a mixture of neoclassical accents, shapeshifting rhythm section work that can get funky at times, and vocals from bassist Ruben Willemsen that are more Pet Shop Boys than anything fierce or heavy. And so the flow of the record continues – adventurous, modern, fierce if necessary with proper growl placement – never too technical to forsake catchy hooks or hypnotic grooves, as songs like “Dusk” and “Resurge” exemplify. Keyboardist Sean Lubbersen has that classical, progressive rock edge with more emphasis on his chord play and lead runs than anything bombastic or orchestrated – check out “Closure” for some 70’s Yes/Deep Purple-like organ emphasis in a semi-ballad quiet to heavier format. Names like Haken, Porcupine Tree, Opeth, Periphery, Tool, and TesseracT come up when consuming and processing Xeno – just in this cocktail approach that is organic, stimulating, and mesmerizing at many key points. The record ends on a lengthy note with the 13:15 title track – fusing zig zag calm and crushing passages, ideally moving the listener through robotic/rhythmic accents, cascading bass/drumming that can be Latin one minute or death-oriented the next, plus shimmering guitars, keyboards, and diverse clean/growl vocal emphasis that lovers of these genres cherish.

Sojourn has that hidden gem touch – subtlety creeping in for this modern progressive metal outfit. You’ll be headbanging to parts one moment, swaying to others – then listening intently to hear those time signatures, musical interplay ‘aha’ passages that keep ardent listeners interested for subsequent playbacks. A group to watch as they have breakout qualities.