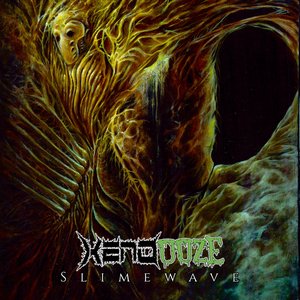 Pulverizing and destructive, yet oddly different. That’s the best way to describe Xeno Ooze’s second release in the form of Slimewave. While the band’s debut, Paradigm Shift, may have escaped our grasp this 10-song EP from the Arizona-based death/grind act surely grabbed us by the throat and refused to let go. This is some exhilarating extreme music that begs to be noticed.

There’s a ton of brutal bands that live solely for being the heaviest and most destructive out there. What Xeno Ooze does differently is that instead of just relying on the good ole bludgeoning, they’ve found a way to work in some odd sound effects and atmosphere into the mix without it causing the release to lose any momentum. “Root & Phlegm” for instance, opens with utter battery but slows into a horror-esque and sci-fi crawl by its end with a real sense of dread. The songs have an unpredictability because of this, not to the point where it seems scatterbrained, but you feel that the music has a pathway that you aren’t privy to. “Twilight of the Idyll” travels down some labyrinthine and eerie corridors and also exudes that sci-fi feeling while still delivering some solid basslines and urgent heaviness. That said, some tracks do just go for the frantic gusto. The grinding “Swillbirth” and “Gnarciscyst” fire off rattling blastbeats and raging riffs that will knock you right down. Other songs like “Radical Putrefaction” take a momentary pause from that grind mentality to insert some pure death metal breakdown energy, offering a real neck workout in the process.

Slimewave is intriguing in its use of sheer brutality, yet tempering it with some creepy atmosphere and effects. It’ll stick with you longer than the average death/grind release because of it, yet it retains all of the ‘get up and go’ brutality larger name acts dish out. It’s a very promising combination for the band’s future.