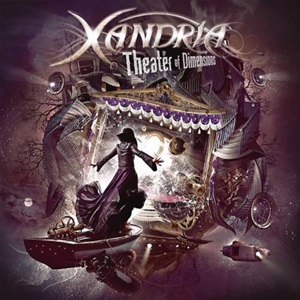 These are healthy times for German symphonic metal act Xandria indeed. Impressive touring and festival appearances the world over (including a North American run with Sonata Arctica in 2014), the seventh studio album Theater of Dimensions appears intent on blossoming all aural horizons. The addition of male guest vocalists from a wide array of sub-genres beyond tin whistle, flute, bassoon, shakuhachi, and low whistle performances from the multi-talented guest instrumentalist Jeroen Goossens expand upon the already wide array of musical thoughts the band embrace and put forth – giving listeners a broad spectrum of material to take in and process.

Known elements of operatic melodies, symphonic orchestration keyboard strokes, proper choir placements, and a deadly electric guitar foundation keep Xandria on the more dramatic side of the landscape – vestiges of Therion appear on the momentum builder “Where the Heart Is Home” as drummer Gerit Lamm injects powerful rolls and turn on a dime progressive time changes. The folk-ish/power side blazes for in Blind Guardian-ish fashion for the follow-up “Death to the Holy”, Dianne van Giersbergen playfully dancing in unison to the ascending and descending guitar/keyboard foundation, the chorus sing-a-long friendly. The record twists and turns, going into extreme nuances for some of the down-tuned picking and death-like picking for “We Are Murderers (We All)” that features Soilwork’s Speed Strid for complementary vocal contrasts while the instrumental “Céilí” takes Celtic/Thin Lizzy influences into the Xandria style.

Keyboardist/guitarist Marco Heubaum and guitarist Philip Restemeier light up when given a chance for softer to heavier transitions – making “Song for Sorrow and Woe” one of the second half bright spots, the trailing lead break circling back to the vocal melody beautifully. Dianne’s register exudes premiere passion and highest tier status – knowing how to balance conventional melodies and operatic passages to make the commercial sounding “Burn Me” another highlight. The record concludes with “A Theater of Dimensions” – a fourteen-minute plus arrangement that begins softly in almost a nursery rhyme context before picking up the orchestral battle cry pace, the double bass / choir action rivets as well as Henning Basse’s supplementary contributions. If the band choose to air this live, it’s ideal for some special lighting and scenery tricks to elevate the cinematic storyline.

At 74 minutes, Theater of Dimensions contains 13 tracks to digest – Xandria serving up the right diversity though to head off most naysayers of the movie-length excursion. If Sacrificium put the band in the big leagues, this current record should push them into superstar symphonic metal status.