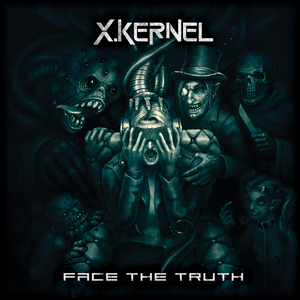 When a band cites its influences with a trifecta such as Dark Tranquillity, In Flames, and Soilwork, it’s sure to pique some interest for those of us with a deep love of melodic death metal. A relatively new unit, X.Kernel only have a previous EP (Kingdom of Pain) to their names and Face the Truth looks for the band to leave their mark.

It’s hard not to hear the 3 bands mentioned above when you listen to Face the Truth, which is both a blessing and a curse. Some strong and catchy melodies are the first thing you’ll pick up on as you begin the journey, with “Exhausted” hitting that not-quite-modern melodic death metal sound right off the mark. The band can still maintain some serious aggression throughout the album, and aren’t afraid of hitting the thrash pedals and zipping at full speed, under the guise of some melody and keyboards of course. Synths are what draw the band in a more modern direction, with some upbeat vibes that add some color to the palette. It’s never too over-the-top, and they do tend to work in unison with the guitar melodies rather than take away from them. Vocally, the first few tracks leads one to believe it’s going to be a growl only affair, but some songs use some gothic and Stanne-tinged singing (see “In the Void”). These do help with the more melancholic feelings that sometimes hit the tracks, and it’s a better fit than the more commercially-viable and poppy approach.

Face the Truth is an enjoyable listen, particularly if you dig melodic death metal, but to circle back to the last paragraph, it spends too much time in familiar waters to stand out. As a debut, it shows where the band has come from to get here, but one hopes that they’ll set themselves further apart from the crowd next time – some more embracing of the melancholy that exists in some tracks may, in fact, be a fine starting point.