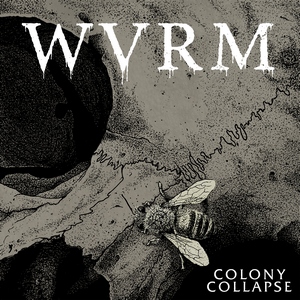 Sitting around inside all day is enough to make anyone want to vent some rage, which is why this is the perfect opportunity to indulge yourself in South Carolina’s WVRM. Vengeful deathgrind of the purest formula, the band’s third album Colony Collapse, is an experience that pulls off exactly what it wants to. That of course, is to provide a hellishly brutal soundtrack that spits venom and fire.

Colony Collapse is straight-up deathgrind that pulls no punches. 14 tracks in 26-minutes, it barely wastes a moment in going from blistering, blastbeat-driven territory full of snarls, roars, and dizzying riffs into absolutely monstrous moments of heavy grooves. Opener “Walled Slum City” is the best example to start things out, with speedy tempos and visceral anger kicking the gates open, only to shift into a massive stomper of a groove later in the track that is sure to get your head and body moving. Some tracks are short, explosive bursts of energy that call things off before a minute is up, such as “Hands The Bear The Hive” and “War Promise//Successionville,” but manage to be more than a sheer blur due to the riffs and some tempo variation. Likewise, some tracks have some more meat to their bones, such as the 3-minute assaults of “Thorn Palace” and “Angel of Assassination” – which give the brutality a little more space to be fleshed out. There’s also the more eerily atmospheric title track towards the end of the album to give it a bit more diversity without losing too much aggression.

Colony Collapse works because it embraces the best of the deathgrind before it and runs with it. It understands that vitriol is key for this type of material and revels in it, but not to the point where everything is an unrecognizable blur of aggression. Instead WVRM prove themselves by showcasing their ability to create pounding grooves in addition to bloodcurdling speed – leaving an impression that is visceral and still compelling to listen to repeatedly.