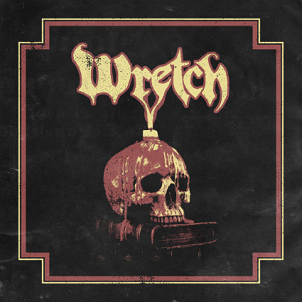 Lots of folks were behind The Gates of Slumber, the classic doom/stoner trio from Indianapolis who released a batch of critically-acclaimed albums. Valid because of their unabashed Sabbath-isms and sorcery imagery, the band were well on their way to becoming an underground mainstay until personal problems and bad luck sidelined the band permanently. Only adding to the band’s troubles was the 2014 death of bassist Jason McCash, who mainman Karl Simon was particularly close. Wretch was already underway by the time of McCash’s passing, but their self-titled debut is undeniably influenced by his death.

Simon (who is joined in Wretch by drummer Chris Gordon and bassist Bryce Clarke) has stated his days of writing songs about swords and sorcery are long gone, preferring a more personal angle with Wretch. McCash’s death has provided the man with a bevy of close-to-home topics, clearly noted in songs like “Running out of Days,” “Rest in Peace” and “Grey Cast Mourning.” However, the man’s familiar doom-trod moves along without much of hiccup here. His riffs are often slow, partially meandering, but effective, as so heard on “Winter,” which employs a swirling effect. “Icebound” gets the nod as the album’s best song, a beefy, overdrive’d cut that matches up well with Simon’s previous output; think somewhere between Gates’ Conqueror and Hymns of Blood and Thunder.

It’s going to be a long road to travel for Simon and Wretch to reach the same level as The Gates of Slumber. Heck, he may not even want to go that far again. Yet the fact Wretch even exists probably serves as a mini-triumph for a man who has endured worse battles than the ones he so detailed while in The Gates of Slumber.