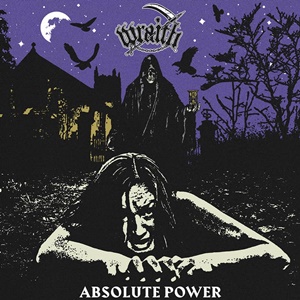 An infamous underrated late 80’s album from power/thrash band Powermad had the same title as this one by this Indiana band Wraith – but that’s where the similarities end. Issuing a quick turnaround from their 2018 debut Heed the Warning, the three-piece deliver a pounding, mean sound for Absolute Power – roaring through nine originals and a closing cover of The Misfits in a scant twenty-eight minutes that will certainly reverberate well for those who grew up discovering 80’s thrash, when the movement was full of venomous vigor and unabashed primal angst.

Many of the guitar riffs from Matt Sokol possess that early Metallica Kill ‘em All spirit – as well as churning a bit of that Venom/Motörhead raw energy that galvanized musicians who clamored for bands that trusted instincts and played from the heart, not for commercial fame or fortune. The opening double salvo of “Devil’s Hour” and “Acid Mass” showcases a punishing riff parade that makes headbanging mandatory – even with the d-beat tempos and frantic stop/start transitions. Crazy bass/drum fills make a speedier effort like “The Curse” an early front half favorite – Matt’s raspy Cronos-like vocal delivery matching the intensity of the musical movements. Wraith excel at the jackhammer, get in and get out approach – even when they decide to segment some of the left to right guitar panning against bass/drum marks for “At the Stake”, it’s hard not to be sucked into the ripping thrash pouring from the speakers. No song exceeds 3:30, so you never have to worry about an arrangement overstaying its welcome. “Death Comes Ripping” is the closing cover from The Misfits – appropriate given Wraith’s affinity for that era of heavy music, placing a nice proverbial bowtie ending to a speedy, pissed off record.

Tack on a chilling night scene cover with black and purple hues and it’s easy to understand why Wraith are gaining acclaim in the Midwest and beyond for their blackened brand of speed/thrash. Perfect for those who want to go back to the early/mid-80’s period and channel that youthful, pissed-off sound.